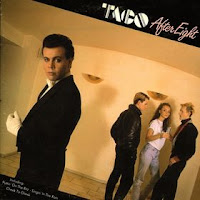 This month marks the thirtieth anniversary of the release of After Eight, the debut album by Taco. Born Taco Ockerse, this Indonesian-born Dutch singer started his career as a singer in Germany. His 1982 album was released in over forty countries, reaching number 59 in Germany, number 17 in New Zealand, number 11 in Austria, number 5 in Canada and number 4 in Norway.


Side one starts with Taco’s version of “Singin’ in the Rain” which was released as the third single from the album. The song opens with a spoken word monologue backed by trickling rain sounds, before moving into a synth fueled bouncing rhythm. The original song was written in 1927 and was most famously sung by Gene Kelly in the 1952 film by the same name.

“Tribute to Tino” is an ode to the silent film legend Rudolph Valentino. The lyrics make mention to a number of his more famous films.

“Puttin’ on the Ritz”, the second single, really clicked with listeners (I even owned a copy on 45rpm). Irving Berlin wrote it in 1929 and Fred Astaire did a famous performance to it on the 1946 film Blue Skies. Taco put a synth spin on the classic that helped him garner a number 4 spot on the US Billboard Hot 100. There is even a tap dance solo in the song to pay tribute to Astaire.

“I Should Care”, a sentimental ballad, has been recorded by many since 1944; the list includes Bing Crosby, Nat King Cole and Barry Manilow. This version has a moody feel thanks to the synthesizer backing music.

“Carmella” is original tune about a mysterious, exotic woman who totally captures a man’s heart. The music has an old-world flare to it.

Side two opens with “La Vie En Rose”, a song originally made famous by the French singer Edith Piaf in 1946. Taco sings this lovely tune entirely in French.

“Cheek to Cheek” was the first single from the album. Taco goes back to Irving Berlin for this one, a song made famous by Fred Astaire and Ginger Rogers in the 1935 film Top Hat. It shares a lot of commonality with the second, more famous single. If you like one, it stands to reason you would like the other as well.

The B-side to the first and third singles was “After Eight”, a bouncy number about anticipating a wonderful evening with a waitress named Kate.

“Livin’ in My Dreamworld” was the B-side to the second single. The lyrics tell of Taco’s love of classic films and old-time music, when the world was a simpler place.

“Thanks a Million”, the title song to the 1935 musical that starred Dick Powell, Ann Dvorak and Fred Allen, closes the album.

The timing of this record really helped Taco make a brief mark in the early 1980’s. The retro reinterpretation trend was already hitting full steam thanks to the likes of medleys by Stars On or the various Hooked On… records. After Eight, with its classy nod to old-time Hollywood when everyone dressed to the nines for dinner and acted so elegantly, falls right into that area quite well. That’s one of the things I always appreciated about the music of the early 1980’s - the variety. There was room for just about everything, and one never knew what would take hold in the public conscious, even if for just a short time.
Posted by Martin Maenza at 4:30 AM

Email ThisBlogThis!Share to TwitterShare to FacebookShare to Pinterest
Labels: 80's, After Eight, Irving Berlin, music, Puttin' on the Ritz, Taco