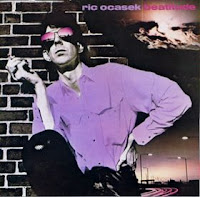 Today (December 30th) marks the thirtieth anniversary of the release of Beatitude, the first solo album from American rocker Ric Ocasek, lead singer and primary songwriter for the Cars. Joining him on this 1982 record were Jules Shear, Stephen Hague, Greg Hawkes, Fuzzbee Morse, Stephen George and others.


Side one begins with "Jimmy Jimmy". As the second single, it peaked at number 25 on the US Mainstream Rock charts; it also crossed over to the US Billboard Dance charts where it peaked at number 60. My first impression of this song about a troubled teen, thanks to the synthesizers and the electronic backing harmonies, was that it sounded a lot like Kraftwerk.

"Something to Grab For", the first single, went to number 47 on the US Billboard Hot 100 and number 5 on the US Mainstream Rock charts. The guitars are more prominent here with a track that comes straight out of the Cars’ catalog.

"Prove" again jumps back to that Euro-synth sound but it also mixes in a rather funky bass line and a saxophone solo to boot. It definitely proves to be an intriguing combination musically.

"I Can't Wait" is a perky pop song about anticipating being with the one you love.

"Connect Up to Me" also proved popular on the US Billboard Dance charts, reaching number 37. The seven-and-a-half minute album version has plenty of space to work out the rapid rhythms and steady beats to bop to.

Side two opens with "A Quick One", a song about being cautious about jumping too deep into a relationship too soon. I like how the synths have an anxious edge to them that fits very well.

"Out of Control" has a very mechanical feel to it, moving along like a well-oiled machine. Combined with Ocasek’s vocal style, the whole thing is very much in control and that makes it all the more stimulating of a track.

"Take a Walk" has a very European new-wave sound to it, with the keyboards most prominent over all other instruments. I get a real strong Flash and the Pan feel from this one.

"Sneak Attack" has a number of musical layers and hooks that kept my attention riveted to it.

The album ends with the explosive threat of "Time Bomb". Once more, we are exposed to a moody musical piece that has the listener on the edge of their seat for the first two minutes. Then the pace changes a bit and things get really intense.

I cannot recall if I heard many of the tracks from Beatitude back in 1982 or not. As a fan of the Cars, this album by Ric Ocasek was definitely something I would have liked during my final year of high school. I certainly enjoyed listening to it today, thirty years later, for this review. It has been added to my list for potential download in the near future.
Posted by Martin Maenza at 4:30 AM