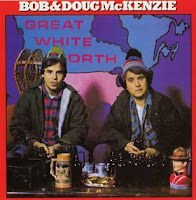 On December 12th, 1981, The Great White North entered the Canadian album charts at number 3. Within a week, it rose to number 1 and remained there until January 23rd of 1982. Not a bad Christmas present for comedians Rick Moranis and Dave Thomas, who portrayed the fictional Canadian television personalities “Bob and Doug McKenzie” on the sketch program SCTV.


The album was more than just a hit in Canada though. It went to number 8 on the US Billboard Hot 200. It was also nominated for a Grammy Award for Best Comedy Album, losing out to Richard Pryor’s Live on the Sunset Strip. It did when the Juno Award for Comedy Album of the Year though.

Most of the tracks on the album are comedic short pieces. Side one opens with the crack of a beer and “This is our album, eh?”. It is followed by a round of the game “The Beerhunter”, an element that surfaced every now and again on the live show. Doug then portrays a teacher in “School Announcements”. This is followed by the very short “The Miracle of Music” (a beer bottle serenade) and then a trip to “Peter’s Donuts”. Next is “Gimme a Smoke”, a return to the beer bottle theme.

The seventh track was also the single from the record. “Take Off” is a musical number featuring guest vocals by Geddy Lee of Rush. This one peaked at number 16 on the US Billboard Hot 100 in March of 1982. The song is very catchy, particularly the chorus. My best friend and I would quote it all the time during high school.

The side then closes with “Coffee Sandwich”.

Appropriately, side two begins with “Welcome to Side Two”. There is then a series of sound effects courtesy of “Doug’s Mouth”, including topical Star Wars references. We are introduced to the reverend “Elron McKenzie” followed by “Black Holes”, a track that featuring a backward masked message that had many of us spinning it in reverse on our turntables.

“You Are Our Guest” was an interactive track that encouraged the listener to read the script enclosed on the linear notes. This is followed by “Ernie’s Mom”.

The other big standout track is “Twelve Days of Christmas”, a holiday classic that has the brothers substituting Canadian appropriate items in as gifts (like “five golden toucs” and “three French toast”). For me, it is not a complete Christmas season without hearing this one a couple times.

The record then closes out with “Ralph the Dog” (a bedtime story), “Okay, This is the End, eh?” and the very brief “Honest”.

Now, I was a huge SCTV fan back during my high school days. I would stay up late every Friday night and tune into one of the channels we got out of Canada to watch the sketch show. Being a big TV fan, I really liked the format with so many things based on a fictional small television studio and its programs. Of course, the Great White North segments were favorites of mine. As such, when this album showed up in our local record store I snapped up a copy of it on vinyl.

My digital library today still includes the two musical tracks from Great White North as those have the most replay value. The others were fun to listen to once or twice but that’s about all.
Posted by Martin Maenza at 4:30 AM

And we must not forget their lessons on the metric system. Just double it and add 30!

Jim, I totally forgot about that! That was right about the time they were trying to get us to learn the Metric system back in school.