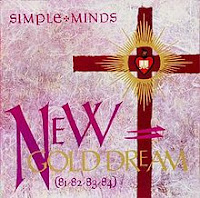 Tomorrow (September 13th) marks the thirtieth anniversary of New Gold Dream, the fifth studio album from the Scottish band Simple Minds. In 1982, the group consisted of Jim Kerr on lead vocals, Charlie Burchill on guitars, Michael MacNeil on keyboards, and Derek Forbes on bass. A trio of drummers was used across the nine tracks (Mike Ogletree on tracks 2, 5 and 6; Kenny Hyslop on track 3; Mel Gaynor on the remaining).


This was the first album by the group to go Platinum in the UK, where it reached number 3 on the charts. Around the rest of the globe, it peaked at number 69 on the US Billboard Hot 200, number 33 in the Netherlands, number 30 in France, number 9 in Sweden, number 8 in Australia, and number 2 in New Zealand. It also appears on the list of 1001 Albums You Must Hear Before You Die.

Side one starts with "Someone Somewhere in Summertime", the third single from the album. It went to number 51 in Australia, number 36 in the UK and number 19 in Ireland. This song has a soft, simmering drama to it that builds up to the chorus. It demands your attention not with flash but a simple whisper.

"Colours Fly and Catherine Wheel" has a seductive rhythm to it that dances around you with a slowly tightening circle. Before you know it, you’re caught in its binding embrace.

"Promised You a Miracle", as the first single, reached number 25 on the charts in Ireland and the Netherlands, number 17 in Sweden, number 13 in the UK, number 10 in Australia, and number 9 in New Zealand. I remember this one from being in rotation on MTV as well as hearing it out dancing. The hooks to the chorus are very catchy and fun, popping up often as they bridge between the more sedated verses. I get a bit of a spiritual vibe from this one.

"Big Sleep" naturally has a dream like lull to it, but it more hypnotizes rather than induces slumber. I really like the keyboard riff on this one. The lyrics give me the impression of someone dealing with the death of a loved one, wondering where they went to after they have gone.

"Somebody Up There Likes You" closes the side with a subtle, funky bass and rich, vibrant synths. This instrumental track really shows off the musical talents of the group.

Side two opens with the title track. "New Gold Dream (81/82/83/84)" is an upbeat song about striving to achieve big aspirations. In the song, that takes the form of a siren of a woman.

The second single "Glittering Prize" hit number 16 in the UK, number 11 in Ireland and Sweden, number 9 in Australia and number 4 in New Zealand. I cannot recall for sure how often I heard this one back in 1982 when I was in school, but I do often hear it now thirty years later when I listen to Sirius XM’s 1st Wave channel. The lyrics have a bit of a spiritual message to me as well.

Herbie Hancock played synthesizer on the next track "Hunter and the Hunted". The curious lyrics focus on an intimate encounter between two lovers.

"King Is White and in the Crowd" closes the album with a seven minute track. In the lyrics I see hints at segregation of races and, for some reason, I also get images of Elvis Presley. I like the music on this one though; it is very mysterious with heavy synth and guitars.

This album New Gold Dream is one, I think, that requires multiple listens to get a richer appreciation for. The first impression for me, beyond the three singles, is a quieter introspective one. It definitely would have been lost on me back in 1982. And as for whether or not one needs to hear this one before they die, I would strongly disagree with the authors of that book on this as well.
Posted by Martin Maenza at 4:30 AM