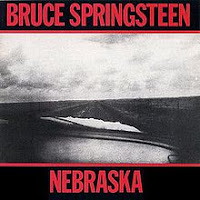 Anyone who gives this album a listen instantly realizes how much of risk the Boss was taking at the time. This record, basically a folk album, sounds completely different than everything else that was gracing the charts in 1982. Where everyone was embracing new sounds, he went old school with one-man, one-guitar. It was an experiment that paid off as critics loved it as did most fans.

Me? Not so much. For my full review of the album, click here.
Posted by Martin Maenza at 4:30 AM