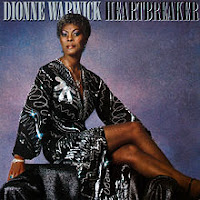 Today (September 28th) marks the thirtieth anniversary of Heartbreaker, the twenty-third studio album from Dionne Warwick and her fourth on the Arista label. The producers were Barry Gibb, Karl Richardson and Albhy Galuten, the hit making trio who worked together in 1980 on Barbra Streisand‘s Guilty album. Gibb co-wrote nine of the ten songs, three with Galuten and the other six with his brothers Robin and Maurice.


The album was a Platinum seller in the UK, reaching number 3 on that country’s charts. In the US, it peaked at number 25 on the Billboard Hot 200 and number 13 on the R&B Album charts.

Side one opens with the title track. Despite Warwick‘s lack of fondness for the song, “Heartbreaker” was a smash hit it around the world, charting at number 17 in France, number 15 in Canada, number 10 in Austria and Germany, number 5 in the Netherlands, number 4 in New Zealand and Switzerland, number 3 in Spain, and number 2 in Denmark, Ireland, Norway and the UK. In the US, the song reached number 14 on the R&B charts, number 10 on the Billboard Hot 100 and number 1 on the Adult Contemporary charts. She has gone on record saying she “cried all the way to the bank” with this one. The track has a very signature Bee Gees stamp to it, from the syncopated rhythm of the drums, the lush strings and the synthesized brass. Barry’s distinctive voice can be heard in the backing vocals of the chorus as well. I think the combination of the two voices really make the record.

“It Makes No Difference” features a mid-tempo funky bass line and a jazzy piano, creating a sophisticate, urban mood. Again, Gibb’s vocals are very clear on the chorus.

The final single “Yours” was released in the UK in 1983 where it stalled at number 66 on the charts. The ballad, the longest track at just over five minutes, has a gentle piano accompaniment to it that really showcases Warwick’s rich and powerful vocals. It really builds to that final chorus well.

The second single “Take the Short Way Home” only charted in the US at number 41 on the Billboard Hot 100, number 43 on the R&B chart and number 5 on the Adult Contemporary chart. The song opens with a funky dance rhythm that brings to mind the best of 70’s disco. There is no doubt of Gibb’s touches on this one.

“Misunderstood” takes the tempo back to the middle range to close out the side. Warwick delivers the verses with clear, precise pronunciation to go with the percussion. The chorus features an interesting echoing effect from layering the vocals.

Side two starts with “All the Love in the World”. As the third single, it failed to make the Billboard Hot 100 in the US (it was stopped at 101); it fared a bit better on the Adult Contemporary charts where it reached number 16. In the UK, the song went to number 10. The rhythm on this one is slow and steady on the verses with a bit of a marimba effect on the chorus that reminds me of the late 1950’s rock.

“I Can’t See Anything (But You)” has that classic 60’s Warwick sound on this declaration of complete devotion.

“Just One More Night” is a bittersweet song about a relationship that has fallen apart due to infidelity.

“You Are My Love” has a slight Latin flavor to its rhythm. Given that the album was record in the Gibbs’ Miami studios, you can definitely see the influences in the sounds here.

The album closes with a cover of the Bob Hilliard/Mort Garson “Our Day Will Come”, the song that was originally a number 1 chart hit in 1963 for the R&B girl group Ruby & the Romantics. Warwick’s take on this classic manages to pay respect to the original while giving it a fresh spin for a new decade at the same time.

I had a major exposure to Dionne Warwick when she hosted Solid Gold in the late 70’s and again in the mid 80’s. I spent a lot of time hanging out at my grandmother’s house during that period and we would sit and watch the show together. It never really struck me as odd that a woman in her generation would enjoy watching a show about the then-modern music; music-variety shows always seemed to be her favorite.

I definitely remember the title track from Heartbreaker playing all over the radio at the time too. As a huge Bee Gees fan, I instantly was into the song. Hearing the rest of the album for the first time now, I think it was a good album with a couple really standout tracks. I was able to pick out a few of the later that I think would be right at home in my music library.
Posted by Martin Maenza at 4:30 AM