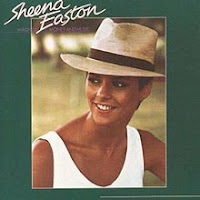 This month marks the thirtieth anniversary of Madness, Money & Music, the third studio album from Scottish singer Sheena Easton. The 1982 release went to number 94 in Australia, number 85 on the US Billboard Hot 200, number 73 in Canada, number 47 in the Netherlands, number 44 in the UK, number 19 in Sweden and number 5 in Norway. As with her earlier records, the UK and the US track listings on this one differed slightly in order and content. For my review, I will be reviewing the tracks in the US order.

"Weekend in Paris" opens with a faint announcer in the background, setting the stage of someone traveling. A young woman goes to surprise her man only to discover he is having an affair with another woman.

"I Wouldn't Beg For Water" was a popular single in the US, reaching number 64 on the Billboard Hot 100 and number 19 on the Adult Contemporary charts. The song is about a woman with a strong confidence and pride whose one weakness is the love of a certain man. Easton’s voice conveys all the emotions of this one beautifully.

"Are You Man Enough" is an up-tempo pop song that calls a guy out on his intentions.

"Ice Out in the Rain", for which Easton looks stunning in its music video, is song about heartbreak.

Side two begins with the title track of "Madness, Money & Music". It’s lyrics are a commentary on the price of fame from a career in the music industry.

While Bette Midler would have a huge hit with the next track in 1988, it was on Easton's album that "Wind Beneath My Wings" was first recorded. If you have not heard this version, seek it out. With hindsight, I think Easton would have had a huge hit with the song had the label thought to release it as a single.

"There When I Needed You" has a slinky rhythm to it, lightly punctuated with a horn section.

"In the Winter", with a simple piano accompaniment, is a powerful melancholy ballad.

"You Do It" is a mid-tempo tune with a light, funky R&B beat.

Like much of Sheena Easton’s catalog, Madness, Money & Music is difficult to find these days. For my review, I had to rely on those who posted videos on YouTube (thanks, music lovers). I wish her label would make it available for sale digitally as it contains some decent pop music. Back in 1982, I would have been all over this album as I gravitated to albums by strong female singers.
Posted by Martin Maenza at 3:18 AM