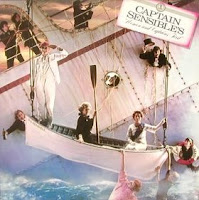 Today (September 3rd) marks the thirtieth anniversary of the release of Women and Captains First, the solo debut album of Captain Sensible. Prior to this 1982 release, the English singer-songwriter, keyboardist and guitarist was part of the punk band the Damned.

The album sparked interest in the UK, going to number 64 on the charts there. Here in the US, the album mostly got play on college radio and other stations that featured early alternative artists.


Side one opens with the industrial jack-hammer beat of “Wot”, one of the singles from the record. It went to number 26 on the UK charts. Sensible delivers the lyrics in a rap style, one of the earliest examples in British music at the time. The British girl group the Dolly Mixture, of which Sensible’s wife Rachel was a member, provided the backing vocals on this one and others on the record. This track was one I was very much familiar in late 1982 and early 1983; the local college radio station I listened to played it quite a bit.

“A Nice Cup of Tea” has a light, pop melody to accompany the lyrics about a mundane daily morning routine.

“Brenda (Part 1 and 2)” is the longest track on the album, clocking in at seven and a half minutes in length. This song about longing to be with a certain gal features a synthesized foundation.

“Yanks With Guns”, a more rocking number, is about police shows from the US that he would watch on the television. It then closes with a news broadcast about the US armed forces followed by a silencing gun shot.

“Happy Talk” is a show tune from the 1949 musical South Pacific, written by Rodgers and Hammerstein. Sensible’s quirky cover spent two weeks at the number 1 spot on the UK singles chart.

Side two begins with “Martha the Mouth”, a new-wave track about a news personality.

On “Nobody’s Sweetheart”, Sensible takes a stab at a pop standard written in 1924. The song has a snappy jazz band sound to it.

“(What D’Ya Give) The Man Who’s Gotten Everything” is a bouncy number about someone who has such a privileged life that he wants for nothing. However, with all his wealth, he is bored beyond belief. It features a quick-paced, rocking accompaniment and a section of backward masked speech halfway through.

The shortest track on the album, “Who Is Melody Lee, Sid?”, comes in at just short of two minutes. It has a country rhythm to it musically. The name Melody Lee was used previously in a song by the Damned, so this is a sequel of sorts.

The final track “Croydon” is an autobiographical song about the large town in South London where he grew up. Seems he went from being a toilet cleaner at the city’s music hall to eventually a performer on its stage. The slow tempo tune was released as the final single from the record.

For me, Women and Captains First is really a mixed musical bag. I have always liked the opening track and a few others were interesting too. Some of the other choices though I have to wonder what Captain Sensible was thinking.
Posted by Martin Maenza at 4:30 AM