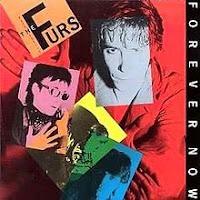 Following on the heels of their 1980 self-titled debut and the sophomore release Talk Talk Talk (click here and here respectively for my reviews of each of those) the Psychedelic Furs put out their third studio album Forever Now in 1982. Today (September 25th) celebrates the thirtieth anniversary of the release of that record.


On this release, the group worked with producer Todd Rundgren. This album continued to expand the group's influence across the globe. In the US and UK it performed better than the previous release (number 61 and number 20 respectively on those charts). It also found them on the charts in Australia (at number 49), Canada (at number 83), New Zealand (at number 4) and Sweden (at number 35). The US vinyl release sported a different track listing and cover; that will be the one I am going to use for this review.

Side one starts with the up-tempo rhythms of the cover track "Forever Now”.

"Love My Way", the first single from the album, was also a chart pleaser. It went to number 42 in the UK, number 23 in Australia, and number 9 in New Zealand. In the US, it reached number 44 on the Billboard Hot 100, number 40 on the Billboard Dance and number 30 on the Mainstream Rock charts. I have been a fan of this song since the early 80’s, and it remains a four-star favorite in my iTunes library. I like the xylophone notes in the background for most of the number, giving it an exotic sound.

"Goodbye" keeps up the danceable beats while the lyrics drip with a sarcastic, dismissive tone.

The guitars on "Only You and I" are as heavy as the percussion, setting a serious overtone for the piece. Ann Sheldon on the cello is a standout on this track.

"Sleep Comes Down" closes this first act with a sauntering tempo that tumbles away at the chorus, just like someone who is worn out and exhausted.

Side two begins with "President Gas", a bitter political number. A live version of the song was released on the B-side of the third single.

"Run and Run" was released as the third single, though it had very minor chart activity. I like the pop culture literary references in the first verse

"Danger", the second single, too did very little on the charts. The horn section on this one gives it a standout sound from the other tracks. Rundgren played saxophone on this one.

"No Easy Street" sounds quite a bit like “Love My Way” in its melody on the verses, though the piece is a bit more moody and stripped down. Very interesting that they would do two so similar songs on the same album, but it works.

"Yes I Do (Merry-Go-Round)" has another interesting rhythm to it. It actually combines together, lyrically, two different songs by taking the verses from one and the chorus from another.

With so much music in the airwaves in 1982, I can see why I was able to miss Forever Now. However, that was definitely a loss for me. I only had a trio of the tracks on a greatest hits CD compilation for the late 80’s.

Listening to this one through for the first time now, three decades later, I came across a number of tracks that I like a lot. The band is in great form here; Rundgren further adds to the production value to create a solid overall release.
Posted by Martin Maenza at 4:30 AM