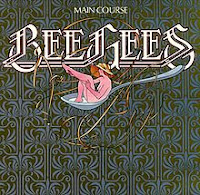 By the time the summer of 1975 rolled around, the Bee Gees had been recording for a decade. Main Course, released in the US in August of 1975, was the thirteenth studio album by the brothers Gibb. It also marked a revitalization of their career as it was the first time one of their albums went Gold in the US since 1967. The album featured an influence of Caribbean-disco rhythms and the use of Barry's falsetto vocal range. Chart-wise, the record went to number 29 in Australia, number 14 on the US Billboard Hot 200, and number 1 in Canada. It also generated a trio of hit singles.


Side one opens with "Nights on Broadway", the second single from the album. It went to number 17 in Germany, number 14 in New Zealand, number 12 in Belgium, number 8 in the Netherlands, number 7 on the US Billboard Hot 100 and number 2 in Canada. Track opens with a great guitar/keyboard riff that sets the urban, gritty rhythms of the tune. The lyrics convey the mysteries of attraction as a man chases after a woman upon whom he is fixated.

The first single was "Jive Talkin'"; it went to number 23 in the Netherlands, number 14 in Australia, number 5 in Ireland and the UK, number 4 in New Zealand, and number 1 in both Canada and the US. The story goes that the rhythms of this one were inspired by the sound the engine of one of the brother’s cars used to make. The lyrics call out a woman for all of the lies she has been giving him. Like the first track, this is a dance classic that really got me moving back in the day and still does today.

"Wind of Change", released as the B-side to the first single, is another favorite of mine from this album. I like how the vocals are subdued on the verses and then explode on the chorus, all backed by a boogie beat and a funky bass line by Maurice. The lyrics are a call to arms, a plea for a transformation to face struggling times. I definitely think this one is an underrated track.

Things switch up a bit with "Songbird", a strong piano-based ballad. The stripped down accompaniment highlights the classic Gibb vocal harmonies.

"Fanny (Be Tender with My Love)" was released as the third and final single in early 1976. It went to number 18 in Belgium, number 12 on the US Billboard Hot 100, number 7 in New Zealand and number 2 in Canada. The lyrics speak to a sensitive, vulnerable side as a man opens up to the woman he loves and begs her not to break his heart. This is another favorite of mine; it just hits an emotional point with me every time I hear it. It definitely got me through some hard times during my dating days of the early 80’s.

Side two begins with "All This Making Love". The tempo is a bouncy and upbeat, while the lyrics paint the picture of a distraught man caught up in a purely sexual relationship.

The B-side to the third single was "Country Lanes". Robin takes the lead vocals on this beautiful ballad; his vibrato vocal style serves this one its melancholy mood well.

Even though the ballad "Come On Over" would become an adult contemporary hit for Olivia Newton-John in 1976, the Bee Gees recorded it first for this album. I have always liked how the Gibbs could easily transition to various musical genres, including country music as this one illustrates.

"Edge of the Universe" was chosen for the B-side to the second single. This song blew me away when I saw it performed in concert in 1979, with the sound system and the lightshow used on it. For me, the song has such a cosmic, spiritual message to it. I listened to it a lot when I was feeling lost and searching for meaning. In some ways, it managed to help a bit.

"Baby As You Turn Away" closes the record on a mellower, soft-rock note. This track was one, for some reason, that I did not listen to as often as I did the others. Perhaps it was because it carries the last track on the second side spot.

I owned a copy of Main Course on vinyl in the late 1970's, picked up around the time Saturday Night Fever was a big hit in theatres. I was all about the Bee Gees at the time and was eager to add some of their back catalog to my small but growing record collection. I can still remember the raised logo on the front cover; I thought that was a cool touch at the time. This one got a lot of play on my turntable during the decade or so that would follow.

The album remains a favorite of mine to this day. Four of the ten songs are four-starred tracks in my iTunes library. The album is one that I have with me at all times, thanks to it being on my iPhone/iPad distributed play list. I never tire of listening to this one and likely never will.
Posted by Martin Maenza at 4:30 AM