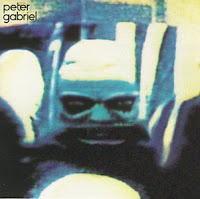 Today (September 8th) marks the thirtieth anniversary of the fourth solo and self-titled album from Peter Gabriel. Sometimes known as Security, Peter Gabriel IV did very well on the charts back in 1982. It hit number 28 on the US Billboard Hot 200, number 18 in New Zealand, number 14 in Norway and the Netherlands, number 10 in Sweden, number 6 in the UK, number 5 in France and number 2 in Canada.


The music on the record was mostly done through electronic equipment (synthesizers, drum machines and a Fairlight CMI used for sampling). The recordings were done at Gabriel's home Ashcombe House in Somerset, England the year prior.

Side one begins with "The Rhythm of the Heat". The song, with its engaging primal mood, is inspired by psychologist Carl Jung's observations of African drummers. Gabriel uses a full vocal arsenal, from hushed whispers to piercing wails, to deliver a moving performance.

The lyrics "San Jacinto" take the viewpoint of the Native Americans whose culture was pushed aside by the modern white society. It also tells the right of passage that teen males went through in order to become a man - being bit by a venomous snake and left atop the mountain alone for a night in order to survive.

"I Have the Touch" was a popular track on the US album-oriented rock stations, which allowed it to climb to number 46 on the Mainstream Rock chart. A remixed version was done for the 1996 film Phenomenon which starred John Travolta. Jerry Marotta’s drums set the tone for this one right out of the gate.

"The Family and the Fishing Net" compares a wedding ceremony to a voodoo sacrifice.

Side two starts with "Shock the Monkey", the single that went to number 58 in the UK, number 29 on the US Billboard Hot 100, number 10 in Canada, number 3 in Italy, and number 1 on the US Mainstream Rock chart. Gabriel has gone on record saying that the song is about how jealousy can release base instincts in humans, causing us to swing towards primal behavior. I can remember how hugely popular this track was back in the day, thanks to an intriguing video on MTV. The song played all over the radio as well as at our high school dances. Again, Marotta’s percussion is all encompassing and made for a perfect beat for dancing.

"Lay Your Hands on Me" is another interesting song. I like how the first two verses are delivered in a low, rapping style. The narrator seems to have found himself in a dark place in life, having turned his back upon faith and religion. And yet he still wants to have something to trust and believe in. He is searching desperately for that.

"Wallflower" is a moving peace about the mistreatment of mentally ill. The singular piano opening really gives that whole feeling of isolation and desperation.

"Kiss of Life" closes the album on an upbeat note musically; the song incorporates African rhythms and chants. Tony Levin delivers some very funky bass riffs on this one.

Back in the early 80’s when this album came out, Peter Gabriel’s music was a bit too deep and philosophical for me. Listening to it from a wiser perspective, I see the richness to it and the messages he was trying to convey. The compositions are varied with elements taken from sources about the globe. That all makes for an interesting musical experience for the ears and the mind.
Posted by Martin Maenza at 4:30 AM