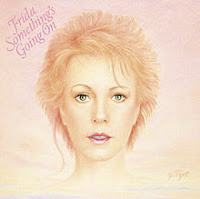 Today (September 6th) marks the thirtieth anniversary of Something's Going On, the third solo studio album by Frida Lyngstad and her first in English. This 1982 release was in development as ABBA was finishing their final year as a working band. The album went Gold in Sweden after spending time at the number 1 spot on their charts. Around the rest of the world, it went to number 18 in the UK, number 12 in Germany, number 10 in Austria, number 3 in Finland and Switzerland, and number 2 in Belgium and Norway. In the US, it peaked at number 41 on the Billboard Hot 200.


Frida was a huge fan of Phil Collins' album Face Value (click here for my review of that album) and had her record label contact him with the offer to produce her solo album. The Genesis drummer quickly signed on to the project. The label then sent out invitations to publishing companies stating that Frida was looking for songs to record for the project. They got over 500 song offers back, allowing for a variety of writers to be part of the album.

Side one opens with a song written by Stephen Bishop titled "Tell Me It's Over". This track about the end of a relationship has a classic rocking sound driven by Collin’s drumming and Don Myrick’s sax playing.

"I See Red", written by Gerry Rafferty, has a pleasant reggae rhythm.

"I Got Something" was written by Swedish singer-songwriter Tomas Ledin. Frida proclaims she is able to do what no other woman can do, and the music supports that teasing come on well.

Things slow down with "Strangers". The ballad uses a simple guitar accompaniment for the first verse, and then the percussion joins in on the first chorus. Peter Manning Robinson gives a mesmerizing synth solo on this one.

The side closes with "To Turn The Stone", a mid-tempo song written by Pete Belotte and Giorgio Moroder originally for Donna Summer. As the second single, it went to number 52 in Germany, number 8 in Belgium and number 6 in the Netherlands.

Side two opens with the Russ Ballard penned "I Know There's Something Going On". This first single was a huge hit around the globe; it reached number 43 in the UK, number 30 in Canada, number 23 in Ireland, number 7 in Italy, number 5 in Australia, Germany and South Africa, number 3 in Austria, Norway, Poland and Sweden, and number 1 in Belgium, France and Switzerland. In the US, it went to number 13 on the Billboard Hot 100 and number 17 on the Mainstream Rock charts. Collins' signature drumming style gives the song its memorable, danceable beat that thunders out of the speakers; it sounds amazing with the volume turned up.

"Threnody" has guitar and synth-based music written by Swedish composer Per Gessle (who later formed Roxette) and incorporates the words of American poet Dorothy Parker.

English songwriter Rod Argent, formerly of the Zombies and Argent, wrote "Baby Don't You Cry No More". It has a gentle pop swing, punctuated by the brass of the Phenix Horns, who have backed up the likes of Genesis and Earth, Wind & Fire.

Bryan Ferry wrote the track the next track. "The Way You Do" has a soft synth and light percussion foundation.

"You Know What I Mean" was written by Collins for his Face Value album. Frida felt a strong connection to the song and wanted to cover it here. Frida’s version features Skaila Kanga on the harp and the Martyn Ford Orchestra on the strings.
The album closes with Frida and Collins performing a duet on "Here We'll Stay". When the song was released as a single in 1983, it was re-recorded with just her vocals; that single went to number 34 in the Netherlands and number 102 on the US singles chart.

For me, Something’s Going On is another musical mixed bag. Having so many different writers involved means you end up with a variety of viewpoints. Even though Frida’s vocals and Collin’s percussion tie things together, it is still a bit all over the map.

I am most definitely a fan of the title track; it still remains a favorite of mine still to this day thirty years later. I also like the first two tracks on side one, but the ballads are definitely too light even for me.
Posted by Martin Maenza at 4:30 AM