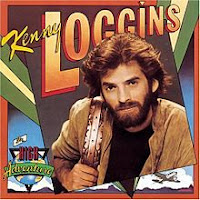 This month marks the thirtieth anniversary of High Adventure, the fourth solo studio album from Kenny Loggins. The 1982 release came out three years after his previous album; despite a long time away from the charts it still managed to climb all the way to number 13 on the US Billboard Hot 200. The sales in the US earned him a Gold certification for the disk.


Side one opens with a rocking collaboration with Journey's front-man Steve Perry. "Don't Fight It" was the first single from the album; it went to number 17 on the US Billboard Hot 100, number 4 on the US Mainstream Rock chart and number 7 on the Canadian charts. Loggins’ and Perry’s voices work quite well together. Guest guitarists Steve Luthaker (of Toto) and Neil Giraldo (husband to Pat Benatar) are also featured on the track.

The third single "Heartlight", released under the title of "Welcome to Heartlight" to avoid confusion with Neil Diamond's hit of the same name that was on the charts in 1982, reached number 37 in Canada, number 35 in New Zealand, and number 24 on the US Billboard Hot 100. The acoustic guitar opening nicely sets the tone for this Spanish styled love song.

"I Gotta Try" was co-written by Loggins and Michael McDonald. It has a pop rhythm built upon the pounding keyboards and a funky guitar that you will find your toes tapping to.

"Swear Your Love" is the first of three tracks Loggins co-wrote with his then wife Eva. The other two are the first side closer and the second one on side two. This song about making a commitment has a strong rock beat and heavy guitars.

Things slow down to close the side with a ballad. "The More We Try" has Loggins going to his falsetto as he reaches for the heart strings.

Side two begins with "Heart to Heart", a tune Loggins and McDonald composed along with composer David Foster. Both men provide musical assists on keyboards on this one. As the second single, it went to number 39 in Canada, number 71 on the US Billboard R&B chart, number 15 on the Billboard Hot 100 and number 3 on the Adult Contemporary chart. I like the soulful groove on this song about a relationship at a crossroads; it has a smoky nightclub feel to it.

"If It's Not What You're Looking For" bounces back to the hard rocking edge with some strong synthesizers thrown in for good measure.

"It Must Be Imagination", the longest cut of the album, is up next. It opens with a mood setting rainstorm and some rather dramatic riffs. This one tells the tale of a guy who can’t sleep at night due to all the relationship scenarios playing through his head. The backing vocals include the song's co-writers Tom Snow and Max Groenenthal.

The last track "Only a Miracle" is another Loggins/McDonald composition. With rich orchestration, this beautiful ballad focuses on the life-changing experiences of fatherhood.

If you come into High Adventure for the hit singles, I think you will be pleased with the rest of the package. That is how it was for me. I knew some of these songs from listening to the radio during my final year of high school. However, the deep tracks are equally as strong. Kenny Loggins showed with this record that he was back for a new decade and crafting solid songs.
Posted by Martin Maenza at 4:30 AM