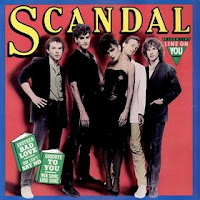 This week marks the thirtieth anniversary of the self-titled debut EP from the New York City native rock band Scandal. In September of 1982, the group was made up of bassist Ivan Elias, drummer Frankie LaRocka, keyboardist Benjy King, singer Patty Smyth, and guitarists Zack Smith, and Keith Mack. Paul Shaffer also provided some of the keyboards on this debut record.


"Goodbye to You" is the first track on side one. As the first single by the group, it went to number 65 on the US Billboard Hot 100 and number 5 on the Mainstream Rock charts. I have always liked the combination of the guitars and percussion on this one, so upbeat and fun to dance to. Contrast that with Smyth’s delivery on the kiss-off, breaking-up lyrics. Definitely an early 80’s new-wave classic and one we danced to a lot back in the day.

The second single "Love's Got a Line on You" went to number 59 on the US Billboard Hot 100 and number 28 on the Mainstream Rock charts. This mid-tempo track is a more traditional rock number that affords Smyth some room to stretch her vocal range.

"Win Some, Lose Some" was co-written by Canadian singer Bryan Adams in 1979 and recorded on his 1980 self-titled debut album. Scandal released their cover as a third single in 1983 but failed to get any chart traction with it. I think the song’s okay but there is very little here to make it stick in my head after it is over.

Side two starts off with "She Can't Say No". The opening simplistic guitar hook is catchy but the subject matter of a girl who can’t refuse any male companionship comes across as a bit sad and pathetic. The song wants us to care about this poor girl but it does not work hard enough to earn those feelings.

The album closes with the ominous mood of "Another Bad Love". Again, I definitely see some potential in the music portion of the song but lyrics leave me cold and disconnected.

I guess there is a reason I only have one of the songs from the Scandal EP in my digital music library currently: for me this one only hits on two of the five tracks. It might be that for the most part they kept to a mid-tempo groove after the opening volley where as I tend to gravitate more to songs that have a higher energy level. That certainly would have been the case back during my senior year of high school when this record made its debut. I am thinking I might add the second single to my music library but that’s about it.
Posted by Martin Maenza at 4:30 AM