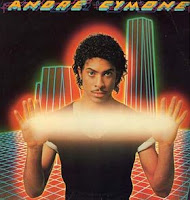 Growing up in Minneapolis, Minnesota, André Simon Anderson was the son of a musician and a social worker, the youngest of six children. The Anderson home also had another member, a young Prince Rogers Nelson who had moved out of his own home due to family conflict. The two teens shared a common love of music.

With the stage name of André Cymone, the young bass guitarist and Prince first worked together in a band call Grand Central. André’s sister Linda and another friend, Morris Day, were part of the group when it was later named Champagne.


Cymone was a member of Prince’s touring band in the late 70’s until 1981 when tension developed between the two. In September of 1982, Cymone released his debut album Livin’ In the New Wave, and today we’ll look at that record to celebrate its thirtieth anniversary.

Side one begins with the title track and one of the singles from the record. “Livin’ In the New Wave” shows clearly that Cymone got the new wave sound; he successfully mixed his own funk filled dance grooves with the synth sounds popular in the early part of the decade. This song celebrates the music of the time.

The other single release from the album was the next track. “Kelly’s Eyes” keeps the party going as he sings about a long-distance relationship with a girl in Los Angeles.

The tempo slows down to a mid-range for “All I Need Is You”, a sweltering love ballad with a classic doo-wop kind of swing to it.

“Trouble” gets the slinky dance groove back on, with the occasional synthesized laser zap that pops up periodically. I have to wonder if Cymone was a video game fan.

Side two opens with “Get It Girl”, a number about encouragement. Cymone plays with a vox on this one to distort his voice and come across as a computerized entity. The synths are featured heavily here to create some catchy hooks. I really like listening to this one facing the speakers so I can pick out each of the layers in individual speakers.

Things slow down again with “Baby Don’t Go”. This ballad with a throbbing percussion, mirroring a beating heart, is a heartfelt plea to his girl to stay the night.

Cymone jams out on “So Fine”, a danceable admiration of a lovely lady.

“Voice on the Radio” is a song about love at first sound, falling for a woman who he only knows by her voice. It is one of those situations where you put an image to the sounds, but how often do we get those wrong? I know I do. Whenever I see pictures of on-air personalities they never look like how I imagine they do.

“Ritz Club” closes the record to celebrate going out to dance and party. It name drops some famed night spots too.

If I heard any of these tracks in 1982, I most likely would have confused them with songs by Prince. Back then, I was primarily hearing his music on the local college radio station that did not often identify songs. In know that by the mid-80’s, when Prince was riding one of his big waves of fame, a local Rochester R&B station would often have a “Prince and his Protégées” night. They would play huge blocks of all the artists from his Royal Badness’ court and that included tracks by Cymone as well.

Just listening to Livin’ In the New Wave, you can clearly see similarities between the songwriting style of André Cymone and Prince. They both come from that same Minneapolis sound, though Cymone does not get nearly as much credit for it as his childhood friend. This album is solid and could easily hold its own with any R&B and funk records at the time.
Posted by Martin Maenza at 4:30 AM