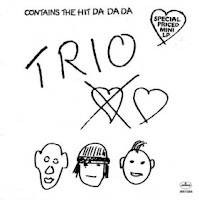 In the early 80's, there was a German band known as Trio that was very popular in its native country. Stephan Remmler sang and played the occasional keyboards, Gert Krawinkel played guitar and Peter Behrens played drums.

Today (September 11th) marks the thirtieth anniversary of Trio, the self-titled extended-play album released by the group to the English speaking audiences. While it only had six tracks, it still delivered some very interesting and memorable music for the early days of new-wave, alternative 80’s.


Side one begins with "Anna - Let Me In Let Me Out", the second single. This has such a stripped down sound with a clap-along beat that gets into your brain and settles in for the long haul.

The first single "Da Da Da I Don‘t Love You You Don‘t Love Me Aha Aha Aha" had gone to number 2 in Germany in early 1982. It later hit number 2 in the UK and number 3 in Canada by year's end. The EP version is six and a half minutes of musical fun that always makes me smile. That repeated Casio keyboard rhythm and bouncing drumbeat are hypnotizing; the “La Bamba”-like riff on the chorus then snaps you back to consciousness.

"Broken Hearts for You and Me" slows things down a bit with a bluesy-rock groove.

Side two starts with the Calypso-flavored "Energie" as Remmler pleas for support from his woman.

I have not heard "Sunday You Need Love Monday Be Alone" for almost three decades, so it was cool to hear it again when doing this review. It has a quirky guitar and mantra-like chorus.

"Ja Ja Ja" closes the record with a thrashing guitar and rapid-fire beat that would sound right at home in a punk club.

Trio was another one of those bands I discovered during my senior year of high school while listening to the local college radio station in the next town over. In these early days of MTV, video and such, that station was definitely played a big part in expanding my scope of genres. I really like how these three guys did so much musically with such minimal means. If you only know “Da Da Da” from the Volkswagen commercials of the 90’s, you barely scratched the surface of this group. Check some of their stuff out online.
Posted by Martin Maenza at 4:30 AM