Twisted Sister - Under the Blade 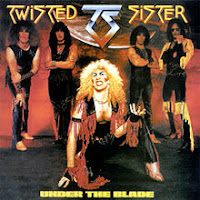 Today (September 18th) marks the thirtieth anniversary of the release of Under the Blade, the debut album from Twisted Sister. At the time the Long Island, NY, band consisted of front man Dee Snider on lead vocals, Eddie “Fingers” Ojeda on lead guitar, Jay Jay French on rhythm guitars, Mark “The Animal” Mendoza on bass and A.J. Pero on drums.

Side one begins with “What You Don’t Know (Sure Can Hurt You)”. The song’s opening is perfect for the first track on their first album; the band very often uses it to open their live shows as well.

“Bad Boys (of Rock n’ Roll)” has a strong melody to it and really showcases Snider’s vocal chops.

“Run For Your Life” changes it up a bit with a slower, introspective opening. It then explodes into a rocking warning message to the one who broke his heart. This is definitely my favorite track on side one.

The energy level remains high with “Sin After Sin”, a song of condemnation of the actions of a troubled individual.

Side two starts with “Shoot ‘Em Down”, a song about strong, confident people who cut down others for their own amusement. In the end, the band calls for a little payback against these kinds of folks.

“Destroyer” tells the tale of a silent, powerful sentinel that passes judgment on the wicked.

The title track is next. “Under the Blade” was actually released as a single by the group in 1979. The song is about Ojeda undergoing throat surgery at the time and the fear that something like that can cause in people.

“Tear It Loose” is a high-energy track all about unwinding after a long week and blowing off some steam.

“Day of the Rocker” closes the album with a prediction that the band will be huge. I like the rhythm to this one, very methodic with a bit of a blue-riff to it.

During my high school years, my best friend John was in to a lot of the heavy metal rock bands, including Twisted Sister. I cannot recall for sure if he had Under the Blade on vinyl; if he did I most likely heard this album a good bit when we were hanging out at his house and messing around on the Commodore 64 computer.

As this one shows, Twisted Sister was a tight performing band right from the start. Do not let the glam make-up fool you; these guys are serious rockers and the music is proof of that.
Posted by Martin Maenza at 2:56 AM