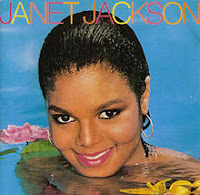 Today (September 21st) marks the thirtieth anniversary of the self-titled debut album from Janet Jackson. Though her older brothers had been recording starts since the late 1960's, the Jackson sister had spent the later part of the 70's and early 80's as a television actress (on Good Times and later Diff'rent Strokes). When it came time to get into the music business, she did not want her family members involved with making the album; she wanted it to be her own project to be judged on its own merits.


The album charted in South Africa (at number 98) and in New Zealand (at number 44). In the US, it reached number 63 on the Billboard Hot 200 and number 6 on the Billboard R&B charts. The entire first side has songs written and produced by Rene Moore and Angela Winbush, an R&B duo that also recorded together. The second side featured writing and production involvement by Foster Sylvers (someone who understood musical families) and Jerry Weaver.

Side one starts with "Say You Do", the third single released from the album; it climbed to number 15 on the US Billboard R&B chart and number 11 on the Billboard Dance chart. The groove on this one is funky and kicking, reminding me a lot of songs by her brothers from Off the Wall and Triumph from a few years earlier (click here and here for my reviews of those two albums respectively). This extended groove is a great way to start the record.

Smartly, "You'll Never Find (A Love Like Mine)" keeps the up-beat dance rhythm going. Janet shows her professional polish here, easily ready to measure against any of the pop/R&B dance divas of the time.

"Young Love", the first single, went to number 64 on the US Billboard Hot 100 and number 6 on the R&B charts. It also hit number 34 in South Africa and number 16 in New Zealand. The lyrics would definitely appeal to a teen market; however the music is another slamming dance groove.

"Love and My Best Friend" is the first ballad on the platter. It some ways, musically, it reminds me of the song “Ben” by Michael Jackson, though this one is hardly about a pet mouse.

Side two begins with "Don't Mess Up This Good Thing". The bass and synth blend is very smooth.

Things slow down quickly with another ballad "Forever Yours".

To help promote the album, Janet performed part of "The Magic Is Working" on an episode of Diff’rent Strokes. I am glad she chose an upbeat dance tune for that as those are the stronger of the tracks on this record, in my opinion. However, of the danceable tracks, I found this one to be the weaker of the set.

"Come Give Your Love to Me" was released as the second single. It went to number 58 on the US Billboard Hot 100, number 30 on the Billboard Dance chart and number 17 on the Billboard R&B chart. This one actually has a bit more of pop-rock edge to it; strands of it remind me of the Jacksons’ song “Torture” that would come two years later in 1984.

I was pleased by Janet Jackson; I found it to be a strong debut effort. Of course, given her pedigree and the strong musical talent working along with her on it, I was hardly surprised. This is definitely one I will be adding to my digital library very soon as it would be right at home with my other 80’s R&B dance records.
Posted by Martin Maenza at 3:29 AM