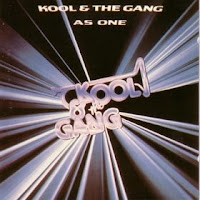 Today (September 7th) marks the thirtieth anniversary of As One, the sixteenth studio album from American R&B group Kool & the Gang. After a trio of Platinum selling albums from the late 70's to the start of the decade, this one slid a bit down in sales; it only achieved Gold in the US. Chart-wise, it went to number 49 in the UK, number 41 in New Zealand, and number 25 in Germany. In the US, it topped out at number 29 on the Billboard Hot 200 and number 5 on the Billboard R&B chart.


Side one starts with "Street Kids", a funky ode to the youth of the day. Released as the fourth single in 1983, it only registered at number 78 on the US R&B charts. The album version is an extended, six minute dance jam. Lead singer J.T. Taylor adds his own rapid-fire rap on this one.

The first single "Big Fun" went to number 40 in Germany and New Zealand, number 30 in the Netherlands, number 16 in Ireland and number 14 in the UK. In the US, it went to number 21 on the Billboard Hot 100 and number 6 on the R&B charts. The blazing horns on this track help to ignite the dance floors, which is exactly what the lyrics are all about.

The title track "As One" is next. This is a classic R&B slow jam.

"Hi De Hi, Hi De Ho" was released as a third single but only in Europe. It went to number 29 in the UK, number 23 in the Netherlands and number 17 in Ireland. While the lyrics may be about a guy being dumped by his girlfriend, the tempo is upbeat and danceable - exactly what you would expect from Kool & the Gang.

Side two begins with "Let's Go Dancin' (Ooh La La La)". This second single went to number 49 in Germany, number 34 in the New Zealand, number 14 in the Netherlands, number 8 in Ireland and number 6 in the UK; in the US, it stopped at number 30 on the Billboard Hot 100 but got to number 7 on the R&B charts. By far, this reggae-influenced party song is my favorite on the album, a four-star tune in my iTunes library. It takes me back to the days of school dances and good times from my senior year.

The album closes by slowing things down for this final track. "Think It Over" is a romantic love ballad delivered smoothly by J.T.

Kool & the Gang delivered another solid R&B record with As One. The guys knew how to compose funky grooves and sweet slow songs that could be enjoyed by the whole family from eight to eighty. Sadly, except for some tracks on a few greatest hits collections, most of this album is not readily available for digital download. If you’ve still got a working turntable, you can score a copy in vinyl off of eBay. I am hoping this one goes digital in the future as the extended length album cuts of some of these songs would be great to add to my music library.
Posted by Martin Maenza at 4:30 AM