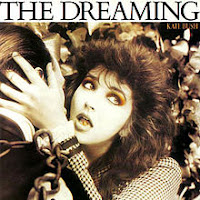 Today (September 13th) marks the thirtieth anniversary of The Dreaming, the fourth studio album from English singer/songwriter Kate Bush. It was also the first album of hers that she produced on her own. While the album only reached number 157 on the US Billboard Hot 200, it did much better around the world. It reached number 45 in Sweden, number 36 in Japan, number 23 in Germany, number 22 in Australia, number 12 in Norway, number 8 in France, number 5 in the Netherlands, and number 3 in the UK. The album generated four singles and earned it a place on the list of 1001 Albums You Must Hear Before You Die.


Side one starts with "Sat in Your Lap", a track that was released almost a year prior to the album. It went to number 11 on the UK charts and number 18 in Ireland. The lyrics focus on a quest for knowledge. The percussion on this one gives it an urgent, anxious edge.

"There Goes a Tenner" was released as the third single, though it failed to make any chart impacts. Inspired by old crime films, this one tells the tale of a bunch of small time robbers who get involved in a huge job that goes horribly awry. Musically, it has a classic dramatic theatre sound to it with a variety of movements to it.

"Pull Out the Pin" draws its inspiration from a documentary on the Vietnam War. Pink Floyd’s David Gilmour provided backing vocals on the track.

The fourth single "Suspended in Gaffa" only charted in the Netherlands (at number 50). The lyrics of this bouncy number tell of seeking something that is unattainable.

"Leave It Open", which closes the side, features some interesting vocal layers. Bush’s voice meanders from audio channel to audio channel. At times though it makes it difficult to follow the lyrics and thus begs for multiple listens.

Side two opens with the title track. "The Dreaming", as the second single, went to number 48 in the UK. The lyrics speak to the plight of the Indigenous population of Australia whose homeland was destroyed by those seeking to mine uranium. I really like the use of the didgeridoo at the end.

"Night of the Swallow" was released as the final single in 1983, over a year after the album. This is the story of a smuggler and his wife who begs him not to continue his illegal activities. This one is a much more straightforward composition, utilizing classic Irish instruments like a penny whistle and uilleann pipes, and has some beautiful vocals.

"All the Love" is a tragic love song, again with beautiful vocals. The segments from phone calls at near the end are an interesting touch.

"Houdini" was used for the B-side to the final single. The song, of course, reflects upon the life of famed escape-artist Harry Houdini from the perspective of his wife Bess. It has a moving violin solo near the end.

"Get Out of My House" takes up elements from Stephen King's novel The Shining, published in 1977 and adapted into a film in 1980.

The Dreaming has some amazing musical production on it and very interesting compositions. I think what kind of keeps me at a distance here though is Kate Bush’s vocal delivery. At times, I really like it and at other times I’m put a bit off. I definitely appreciate it much more today than I would have had I listened to it back in 1982. Back then, my musical palette was not nearly as broad and open as it is today. Still, I think I have a ways to go before I totally “get” Bush’s musical talents.
Posted by Martin Maenza at 4:30 AM