George Thorogood and the Destroyers - Bad to the Bone 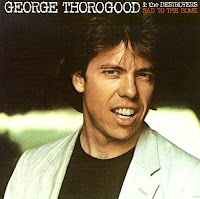 This year marks the thirtieth anniversary of Bad to the Bone, the fifth studio album from Delaware born rocker George Thorogood and his band the Destroyers.

The album was certified Gold in the US where it peaked at number 43 on the US Billboard Hot 200. It also went to number 31 on the charts in New Zealand.


Side one takes us “Back to Wentzville”, written by Thorogood in a classic 50’s rocking style. The opening guitar by Thorogood brings to mind the great Bo Diddley. Hank Carter gives the first of many amazing saxophone solos on this one.

Next up is “Blue Highway”, a mid-tempo blues song written by Nick Gravenites and David Getz.

“Nobody But Me”, the second single, was first recorded by the Isley Brothers in 1963. Thorogood delivers a rapid-fire cover of the song that really revs my engine.

“It’s a Sin” was written by classic blues-man Jimmy Reed. Thorogood evokes that same musical style on his version of the song.

“New Boogie Chillun” is a take on the 1948 song by blues singer John Lee Hooker.

Side two begins with the title track. “Bad to the Bone” was the first single from the album; it charted at number 27 on the US Mainstream Rock charts. Thorogood wrote an opening guitar riff that has become an instantly recognized classic over the decades. This song has engrained itself so well in pop culture in the last three decades that I pretty much know the words by heart (and often sing right along with it).

“As the Years Go Passing By”, written by Don Robey, was first recorded in 1959. The song has a slow, reflective rhythm that perfectly fits to the lyrics.

The B-side to the first single was “No Particular Place to Go”. The song was originally written and performed by Chuck Berry in 1964. Thorogood’s version stays very faithful to its roots.

The final track on the album “Wanted Man” was written by Bob Dylan. This one gives a bit of a different side of Thorogood as it has a more folk-country sound to it.

In the late 70’s and early 80’s, I was exposed to a lot of George Thorogood and the Destroyers thanks to my older brother. He had a number of their albums on vinyl, including Bad to the Bone. It was through some of these Thorogood records that I came to understand and appreciate, as Thorogood does, the classic blues roots to rock and roll. Listening to albums like this inspires me to seek out some of the artists from which Thorogood drew for this album.
Posted by Martin Maenza at 4:30 AM