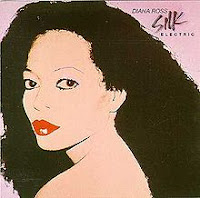 Today (September 10th) marks the thirtieth anniversary of the release of Silk Electric, the thirteenth solo album from Diana Ross. Following on the heels of two Platinum selling records, this one held its own fairly well on the charts. It went to number 44 in Canada, number 33 in the UK, number 27 on the US Billboard Hot 200 and number 5 on the US Billboard R&B charts.


Side one opens with a track written and produced by Ross’ friend Michael Jackson. Nominated for a Grammy in the category of Best Female R&B Vocal Performance, “Muscles” was the first single from the record. It went to number 18 in Canada, number 15 in the UK, number 10 in the Netherlands, and number 10 on the US Billboard Hot 100; it reached number 4 on the US R&B charts as well. Ross purrs on this one in a slinky, seductive manner as she lusts for a man with a chiseled physique. She comes off as totally superficial but it works here. That bass riff really makes the song memorable for me.

The second single “So Close” stalled at number 40 on the US Billboard Hot 100, however it was a number 13 hit on the US Adult Contemporary chart. It has a late 50’s doo-wop sound to it musically with an infusion of synthesizers to entice the present day audience. Luther Vandross arranged the vocals here and contributes backing ones as well.

“Still In Love” appeared on a B-side of “Pieces of Ice”, the first single from her follow up album Ross. On this slower ballad, Ross sings of those deep feelings that don’t fade completely when two people have been in love. This one definitely showcases her beautiful and powerful voice.

On “Fool For Your Love”, Ross takes on a harder rock edge. The guitars squeal and the drums pound as the legendary singer delivers the vocals with plenty of attitude. I think it all works really well together for her. This track was used as the B-side to the second single.

The side closes with a short, mostly instrumental piece “Turn Me Over”, a cue back in the old days of vinyl to flip the record.

Side two starts off with the question “Who”. This final single only charted in the Netherlands - at number 44. This song harkens back to the late days of disco with its funky bass, sweeping strings, and danceable drumbeats.

“Love Lies” is a mid-tempo rock number about falling for the deception of a dishonest partner.

“In Your Arms” is an intimate ballad about surrendering completely to the physical aspects of love.

“Anywhere You Run To” was the B-side to the third single. This jaunty tune features the horns of Randy Brecker.

The closing track “I Am Me” also served as the B-side to the first single. This time she goes with a reggae rhythm on this self-aware song.

Silk Electric is definitely a mixed-bag musically. There are some very high points and some very low points. For me, the low points tend to drag the whole thing down to an average level though. I am very curious what might have happened if Diana Ross had let her good friend Michael Jackson produce more than just the first track. I think that would have been something much more appealing overall.
Posted by Martin Maenza at 4:30 AM