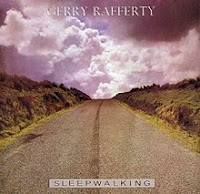 This month marks the thirtieth anniversary of Sleepwalking, the fifth studio album by the late singer-songwriter Gerry Rafferty. The album did marginal in sales, reaching only number 39 on the UK charts. After this release, Rafferty took a six year break from recording.

Rafferty co-produced the album with Christopher Neil, who also did much of the synthesizer and drum machines for the disk.


Side one starts with “Standing at the Gates”, a nearly seven-minute number about being at a crossroads in life. It opens with a guitar solo by Rafferty and includes a saxophone solo by Mel Collins (who worked with the Alan Parsons Project, Dire Straits, the Rolling Stones and more). It was the first single released from the record.

“Good Intentions”, the B-side to the first and third singles, features a syncopated drumbeat and blues piano melody.

“A Change of Heart” rocks along by shifting the tempo into a higher gear for the opening and its chorus. It was the third single from the album.

“On the Way” dabbles with a slight Calypso-island sound

Side two kicks off with the title track “Sleepwalking”, which was also the second single. Mo Foster throws down a funky bass groove for this one.

The stalking tempo of “Cat and Mouse” perfectly matches the lyrical tale of social predators.

“The Right Moment” is the shortest track on the album, at just over three minutes. But that is plenty of time to explore this beautiful piano-based ballad. Olivia Newton-John recorded a version of this one for her 1985 album Soul Kiss.

“As Wise as a Serpent” closes the album with a bit of a country-western feel.

Sleepwalking is one of those albums that my seventeen year old self would not have appreciated back in 1982. However, three decades later, I can very much respect Gerry Rafferty as a musician. He recorded some rich and rewarding compositions for generations to enjoy.
Posted by Martin Maenza at 4:30 AM