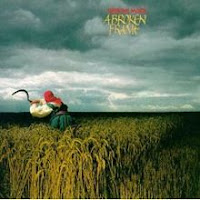 Today (September 27th) marks the thirtieth anniversary of A Broken Frame, the second studio album by Depeche Mode. Now a trio (Vince Clarke left the group), the band continued to build on the momentum of their debut album Speak & Spell (click here for my review of it) with this 1982 sophomore release.


This album too went Gold in the UK, peaking at number 8 on the charts. Around the world, it hit 194 in France, 177 on the US Billboard Hot 200, number 56 in Germany, number 43 in New Zealand and number 22 in Sweden. It also generated a trio of singles that did well on the charts in Europe.

Side one opens with "Leave in Silence", the third single from the album. It went to number 58 in Germany, number 18 in the UK, number 17 in Sweden and number 13 in Ireland. The synth keyboards by Martin Gore and Andy Fletcher give this one a reserved yet danceable rhythm.

"My Secret Garden" tells of a man’s covert activities that are discovered by his lady.

Depeche Mode was always experimenting with sound, even this early in their career. "Monument" is an example of that, even though the approach was very minimalist in nature.

"Nothing to Fear" is a sweeping four-minute instrumental track that shows the wide range two men on synthesizers can achieve.

"See You", the first single, charted in Germany (number 44), Ireland (number 9) and the UK (number 6). This song about a simple request to get together has vocal harmonies that remind me of the British pop groups of the 60’s. It contrasts well with the new-wave musical stylings of the band.

Side two starts with "Satellite", a song about a man who voluntarily locks himself away from the rest of the human race.

The mood and tempo pick up a bit with the next track. The second single released was "The Meaning of Love". It went to number 64 in Germany, number 17 in Ireland, number 16 in Sweden and number 12 in the UK.

"A Photograph of You" is post-breakup song about those little things left behind to remind you of the special person no longer in your life. This one too has a pop sensibility to it that differs from some of the first record’s songs.

"Shouldn't Have Done That" too is along that same musical vein. The lyrics speak to ill-conceived choices in life. It closes with the sound of marching soldiers and a blowing wind.

"The Sun and the Rainfall" closes the record on with a more danceable albeit melancholy rhythm.

The US release of the album added one more track in the middle of the second side. "Further Excerpts From: My Secret Garden" is an instrumental version of the track that appeared on side one. It was also used as the B-side to the third single.

A Broken Frame is an interesting record. It is definitely different than the Depeche Mode that I became familiar with during the mid-80’s. Given that, the compositions are interesting, especially since everything is done via keyboards. This band was definitely on the forefront of the changes in the music sounds of the decade.
Posted by Martin Maenza at 4:37 AM