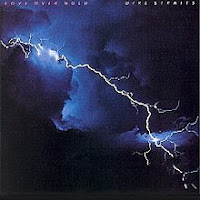 This Platinum seller went to number 1 in the Australia, Austria, Italy, Norway, New Zealand and the UK. In the US, it went to number 19 on the Billboard Hot 200. Singer and guitarist Mark Knopfler wrote all of the songs.


Side one opens with the epic "Telegraph Road" which clocks in at over fourteen minutes in length. The song opens with a wonderful, mood-setting piano solo by Alan Clark. The title refers to a section of suburban Detroit, Michigan, with the lyrics discussing how the city built around the stretch of land. Looking at the album cover while listening to this cut, you get a feeling you are out there with the storm brewing overhead; I find if I close my eyes I am transported away with this one. It is a beautiful composition.

An abbreviated version of "Private Investigations" was released as the first single; it charted at number 28 in Italy, number 19 in Austria, number 4 in Switzerland and number 2 in the UK. This ballad tells a great story of with a lover's betrayal and the bitter feelings that come from uncovering it. Hal Lindes provides the acoustic guitar at the start that is quiet and introspective. The song then builds, thanks to John Illsley’s stalking bass, to a dramatic and tragic conclusion.

Side two begins with "Industrial Disease", a track that went to number 75 on the US Billboard Hot 100 and number 9 on the Mainstream Rock chart. The lyrics refer to the decline of manufacturing in Britain in the early 1980's that lead to many problems for the people who depended upon the industry for their livelihood. This track is a more traditional rocker, with heavy guitars and driving drumbeat by Pick Withers. This was one of the tracks that the album-oriented rock station played back in my high school senior year.

"Love Over Gold", a jazzy ballad, weighs the price of a reckless sex life. I really like the passion that fills the music on this one. I like the synthesized marimba near the end.

Knopfler channels a little bit of Bob Dylan on the vocals for the final track "It Never Rains”. This one definitely reminds me of the group’s work that would come as the 80’s progressed.

This was my first listening to most of Love Over Gold and I have to say I enjoyed it quite a bit. Even though nearly all of the songs are over six minutes in length, I think it works very well. The band gets to deliver some amazing music with the extra time. I would rather have quality of tracks over quantity any time. Dire Straits gets that formula right with this album.
Posted by Martin Maenza at 2:48 AM