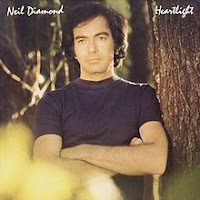 Today (September 17th) marks the thirtieth anniversary of Heartlight, the fifteenth studio album from Neil Diamond. It was a successful follow up to his 1981 release On The Way To The Sky (click here for my review of that one) and also went Platinum in the US. It reached number 43 in the UK, number 37 in New Zealand, number 8 in Australia, and number 9 on the US Billboard Hot 200.

On most of the tracks, Diamond co-wrote them with others including Burt Bacharach, Carole Bayer-Sager and David Foster.


Side one opens with the title track and first single. “Heartlight” was inspired by the film E.T. the Extra-Terrestrial which was a box-office smash the summer of 1982; Diamond, Bacharach and Bayer-Sager all had seen the film together and wrote the song soon after. However, they were required to pay Universal Studios $25,000 for use of ideas from the film in the lyrics. Given how popular the single was, based on airplay back in the day, it was money well spent. The single went to number 47 in the UK, number 29 in Australia, number 23 in New Zealand, number 22 in Belgium and number 21 in Ireland. In the US, it went to number 5 on the Billboard Hot 100 and number 1 (for four weeks) on the Adult Contemporary charts.

The second single “I’m Alive” hit number 35 on the US Billboard Hot 100 and number 4 on the US Adult Contemporary charts. The lyrics are an affirmative mantra, celebrating the positives in life over the negatives.

“I’m Guilty” was the B-side to the third single. The gentle ballad opens with a wafting saxophone solo and sweeping piano.

“Hurricane” is a gentle storm of a song.

The ballad “Lost Among the Stars” was the B-side to the second single. This one has a slight island rhythm to it that sways the listener to and fro.

Side two begins the acoustic guitar of “In Ensenada”, a track that summons up images of an across the border romantic escape.

“A Fool For You” is a mid-tempo song about being in love and devoted to that person.

“Star Flight” finally brings things back up to an upbeat tempo with big, bold sounds and a rocking rhythm.

“Front Page Story”, the third single, stalled at number 65 on the US Billboard Hot 100 but reached number 5 on the Adult Contemporary charts. While I remember quite well the first two singles from this album being all over the radio back in 1982 and 1983, this one does not ring many bells.

“Comin’ Home” has more of a classic Diamond rocking sound from the 60’s. The lyrics are about returning home after so many months on the road to be reunited with the one you love.

The album closes on a softer note with the piano ballad “First You Have to Say You Love Me”.

Heartlight is full of solid melodies executed expertly by a veteran singer-songwriter. I would expect nothing less from Neil Diamond. This is an easy-listening kind of record, good on a quiet evening when one is looking to unwind.
Posted by Martin Maenza at 4:30 AM