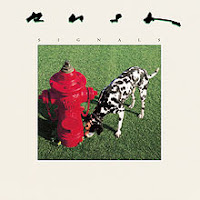 Today (September 9th) marks the thirtieth anniversary of the release of Signals, the ninth studio album from Canadian rock trio of Rush. Following on the heels of the success of Moving Pictures in 1981, this Platinum selling record in North America went to number 3 in both Canada and the UK. In the US, it went to number 10 on the Billboard Hot 200.


Side one starts with “Subdivisions”, the second single from the album. It went to number 53 in the UK and number 36 in Canada; in the US it was shy of the Billboard Hot 100 (reaching only number 105) however it was a Top 10 hit (reaching number 8) on the Mainstream Rock chart. This song very much reminds me of high school and how kids were all trying to fit in to the cool cliques. It is only fitting that the very popular track came out during my senior year of high school. I love the synths played by lead singer Geddy Lee and, it goes without saying, the amazing percussion by Neil Peart.

Guitarist Alex Lifeson delivers some amazing riffs on “The Analog Kid”, a song about a young daydreamer who shuts out the rest of the world.

“Digital Man” bounces along at good pace, with a slight hint of reggae to the chorus.

A geek side note here: Troy Hickman, a friend of mine from the days of my involvement in a role-playing game APA (amateur press association) called The Clobberin‘ Times, was inspired by this album. He uses “The Analog Kid” and “Digital Man” to name two super-heroes in his 2004 comic book Common Grounds.

Side two begins with “The Weapon”, a cautionary tale of how things that people fear can be used as a weapon against them. Of all the tracks, this one sounds the most like the new wave music that could be heard quite prominently on the airwaves at the time.

The first single from the album, “New World Man”, was a number 1 hit in Canada and on the US Mainstream Rock charts. It also reached number 42 in the UK and number 21 on the US Billboard Hot 100. The song has a strong reggae influence to its rhythms; it almost sounds like a track that the Police might have done around this time. Again, this is another song we heard a lot of back in 1982 and 1983. Not only was this one popular around school, but the album-oriented rock station we listened to out of Buffalo played it a great deal as well. Since the Canadian border was right there, Rush got a lot of airplay in our market.

In the lyrics of “Losing It” there is a reference to Ernest Hemingway’s later years of life. Ben Mink plays the electric violin on this one, adding to the overall mood of the piece. I like how Mink compliments the rest of the band’s sound on this record.

The final cut “Countdown” was the final single as well, released only in the UK where it went to number 36. The lyrics describe the launch of NASA’s space shuttle and were dedicated to astronauts John W. Young and Robert Crippen whose voices can be heard within the track.

My best friend in high school John was a big fan of Rush and had Signals on vinyl. I can remember hanging out in his room while we played video games on his Commodore 64; this record was providing the fitting soundtrack.
Posted by Martin Maenza at 4:30 AM

Actually, Martin, I had Champions characters named after at least twenty or thirty different Rush songs (also appearing in Common Grounds was the millionaire superhero with growth powers, Big Money). In fact, about two months ago, I came up with characters based on the brand-new Rush LP, Clockwork Angels!!