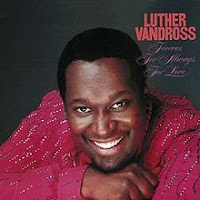 Just shy of a year after the release of his debut album Never Too Much (click here for my review of that one), R&B singer-songwriter-producer Luther Vandross released his second studio album Forever, For Always, For Love. This week (September 21st) marks the thirtieth anniversary of that record.


The album had as strong a showing as his debut. Besides going Platinum in the US (where it reached number 20 on the Billboard Hot 200 and number 1, for three weeks, on the Billboard R&B charts), it also became a Silver seller in the UK (where it reached number 23 on the charts there). Vandross was nominated for a Grammy Award in the category of Best R&B Vocal Performance Male for the record.

Side one opens with "Bad Boy / Having a Party", a medley that blends a Vandross composition with a portion of the 1962 Sam Cooke classic into a smooth mid-tempo dance groove. I think it was done quite well. This first single from the album went to number 55 on the Billboard Hot 100 and number 3 on the R&B singles charts in the US.

"You're the Sweetest One" starts out slow like a ballad but slides effortlessly into another funky dance rhythm. The composition takes disco conventions of the 70’s and evolves them into the next level for a new decade.

"Since I Lost My Baby" was co-written by Smokey Robinson and Warren Moore, originally a hit in 1965 by the Temptations. Vandross' version reached number 17 on the Billboard R&B singles chart. To change things up, he slowed the tempo down and layered it with his rich vocal style.

The title track "Forever, For Always, For Love" rounds out the side. On this beautiful ballad, Vandross is backed by a gentle accompaniment as he bares his soul.

Side two begins with "Better Love" which seems to be a close relation to the title track from his debut record a year before. However, this is hardly a retread; the song stands on its own quite nicely.

"Promise Me", the third single, stalled at number 72 on the US R&B singles chart. I like the piano on this one; it has a tentative feel to it to mirror the cautious nature of the lyrics.

"She Loves Me Back" bounces along with a funky bass groove and perky piano and percussion. It captures that moment perfectly when, for the first time, the one you love tells you that they love you back. You want to scream it out to the world as Vandross does here. This is my favorite track of the record.

The album closes out with "Once You Know How", a mid-tempo ballad with rich strings through out.

Forever, For Always, For Love is strong R&B album with incredible vocals and polished production.
Posted by Martin Maenza at 4:30 AM