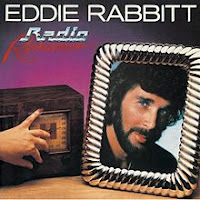 Today (October 1st) marks the thirtieth anniversary of Radio Romance, the eighth studio album from singer-songwriter Eddie Rabbitt. This release went to number 31 on the US Billboard Hot 200 and number 5 on the Billboard Country charts.

"Years After You" is about those lingering feelings that can remain long after a painful breakup.

The tempo picks up slightly on "Good Night for Falling in Love", a celebration of a new relationship.

The next track "You and I" is a duet with Crystal Gayle. As the first single, it shot to number 1 on both the US and Canadian Country charts; it also hit number 1 on the Canadian Adult Contemporary chart, number 2 on the US Adult Contemporary chart, and number 7 on the US Billboard Hot 100. I have been a fan of this ballad since the fall of 1982; the blend of the voices really resonates with my heart strings.

"You Got Me Now" was the B-side to the second single. This one too sings the praises of a new love, but the guitar infuses an eager energy to it.

Side two opens with "Our Love Will Survive", an affirmation of the strength of the bond between two people in love.

"Stranger in Your Eyes" is one about deception and infidelity.

With a swaying beat, Rabbitt puts on a strong facade with "Laughing on the Outside", a song about masking heartache.

"All My Life All My Love" served as the B-side to the first single. It closes the record with a slow song about heartfelt commitment.

This is the type of country album I enjoy; Eddie Rabbitt has a pop-rock edge to his music that made for crossover appeal. If I had one complaint about this record is that I would have liked to have a couple songs that were not about love and relationships. A little variety goes a long way to keeping the listener engaged. Then again, the album is called Radio Romance so he really stuck to his theme all the way through.
Posted by Martin Maenza at 4:30 AM