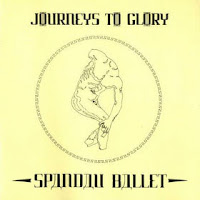 Today (October 16th) we celebrate the fifty-third birthday of English guitarist, songwriter and actor Gary Kemp. He and his bass-playing younger brother Martin Kemp (who celebrated his fifty-first birthday last week on October 10th) were the foundation of Spandau Ballet along with singer/keyboardist Tony Hadley, saxophonist/guitarist Steve Norman and drummer John Keeble.

Spandau Ballet released their first album Journeys to Glory on March 6th, 1981, just ten days after completing its recording. The album hit number 12 in New Zealand and number 5 in their native UK (where it eventually achieved Gold sales status). It generated a trio of hit singles in the UK as well.


Side one opens with "To Cut a Long Story Short", the first single from the album and the group. It went to number 15 in Australia and number 5 in the UK. The lyrics tell the tale of a soldier who has returned home from war only to have a hard time adjusting due to post-traumatic stress disorder. I really like the hooks on this one; they stick with you long after the track completes.

"Reformation" has a strong synth opening and later bridge. It has a much darker tone than what would come later from the group; it reminds me of early Depeche Mode.

"Mandolin", a tragic love story, too has an edge to it, again thanks to the combination of synths with guitars.

The third single "Musclebound" went to number 10 on the UK charts. With a rhythm that drives down like the pistons of heavy machinery, the song speaks of those who labor hard into the night.

Side two begins with "Age of Blows", a sweeping, mid-tempo instrumental piece.

"The Freeze", the second single, climbed to number 17 on the UK charts. This is an interesting piece as the lyrics are limited to less than a dozen lines, repeated a number of times while the music swirls around them like an incoherent dream.

"Confused" has a very different sound to it; for me it has a more retro vibe than anything else due to the repeated guitar chord sequence.

"Toys" closes out the record. The music has a dark, heavy tone that sets the mood for the piece.

Spandau Ballet's debut album came out during my sophomore year of high school, about six months prior to my start of listening to the local college radio station. As such, I did not hear many of the tracks from Journeys to Glory at the time. I became a huge fan of the band during my senior year when their third album came out, with tracks that crossed over to the US Billboard charts and were featured prominently on MTV. It was the early 90's, when I got a CD player, that I heard a number of the tracks here for the first time - thanks to a greatest hits collection CD I picked up.

Listening to it completely through many years later, I am struck by how very much it fits into the other alternative music coming out of the UK at the time. As someone who only knew their later work, I found it interesting to look back at this earliest recording by the group.

For my review of their second album Diamond from 1982, click here.

For my review of their third album True from 1983, click here.