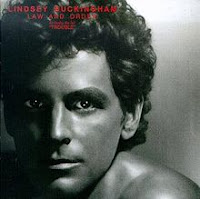 Happy sixty-third birthday today (October 3rd) to American singer-songwriter and guitarist Lindsey Buckingham. This Rock and Roll Hall of Famer was ranked in Rolling Stone magazine’s 2011 list of the 100 Greatest Guitarists of All Time.

In 1981, while still working with Fleetwood Mac, Buckingham released his first solo album Law and Order. He composed eight of the eleven tracks and played numerous instruments (guitar, bass, keyboards, drums, percussion) on the record. It rose to number 32 on the US Billboard Hot 100 and generated a hit single.


Side one begins with “Bwana”. The title refers to an African jungle master, while the music and vocal styles are quirky and up-tempo.

“Trouble” was the first single from the album; it went to number 31 in the UK, number 9 on the US Billboard Hot 100 and number 12 on the Mainstream Rock charts, and number 1 in Australia. Buckingham gets assists by George Hawkings on bass and Mick Fleetwood on drums here. Buckingham pulls out his light falsetto for this one as well as a lilting guitar. The music video featured guests Fleetwood, Walter Egan, Tom Petty, Bob Welch, Dwight Twilley, Jimmy Iovine and Camel’s drummer Andy Ward.

The B-side to the first single was “Mary Lee Jones”. The tempo bounces along on this tune about a lonely woman on the verge of ending it all.

On “I’ll Tell You Now”, Buckingham goes with a lighter, country-rock sound for this one.

“It Was I”, a second single, stalled at 110 in the US and number 74 in Australia. Carol Ann Harris provides some of the backing harmonies on this slow melodic track.

Side two starts with “September Song”, an American pop standard by Kurt Weill and Maxwell Anderson that first appeared in the 1938 Broadway musical Knickerbocker Holiday. This slow tempo ballad is about growing older and less capable.

Buckingham is joined by Christine McVie for backing harmonies on “Shadow of the West”. The old-fashioned sounding piano adds for an interesting touch. It has a country melody and beautiful harmonies.

“That’s How We Do It in L.A.” was the B-side to the second single. The rhythm is infectious and fun. The irregular, constantly shifting beat adds to the song’s uniqueness.

“Johnny Stew” is a song in tribute to American folk singer John Coburn Stewart who Buckingham worked with on his 1979 album Bombs Away Dream Babies. The sound effects on the verses give them a distant, ethereal quality.

On “Love From Here, Love From There”, Buckingham has a couple different guitar riffs going simultaneously as well as what sounds like either a ukulele or a mandolin.

“A Satisfied Mind” was written by Joe Hayes and Jack Rhodes in the early 1950’s and has been covered by many over the decades (Porter Wagoner, Ella Fitzgerald, the Byrds, Bob Dylan, Johnny Cash, Glen Campbell, Joan Baez and more). The message on this one is: in life, monetary things are meaningless if one is not content with their own thoughts and ideas.

Back in 1981 when Law and Order came out, I was already familiar with Buckingham’s work with Fleetwood Mac in the late 70’s and early 80’s. From this solo debut, I can remember hearing “Trouble” on the radio quite a bit but not so much the rest of the album. A couple years ago, I really got into his work and picked up a few of his early solo releases in digital format. I continue to be impressed by his amazing guitar work and like the fact that he was willing to dabble with a variety of music styles rather than stay with the safe, known and familiar. It is a joy to see someone passionate about what they do, and Buckingham certainly has a passion for music.
Posted by Martin Maenza at 4:30 AM