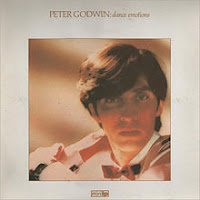 In the later part of the 1970's, Peter Godwin was part of a progressive-glam band Metro along with Duncan Browne. Together, they did a trio of albums from 1976 to 1980.

This month marks the thirtieth anniversary of the release of Dance Emotions, his first solo EP from 1982


Side one opens with an extended version of "Emotional Disguise", the third single. This danceable track warns of hiding one’s feelings to avoid the risk of heartbreak; it comes from a place of hurt and rejection.

An extended version of "Torch Songs for the Heroine", the first single, is next. It opens with a whispered repetition of the song title before the synthesized keyboards kick in. It has a big, dramatic feel to it that I find very interesting.

"French Emotions" appeared on the B-side of the third single. It is the earlier song “Emotional Disguise” sung in French. For this American in the early 80’s, there was always something exotically appealing to hear a song in another language like German or French. Even if I did not understand the words, I would get the feeling and mood from the music.

Side two begins with the dance mix of "Images of Heaven", the second single and probably the most known song from the record. For me, I likely first heard this one on the local college radio station in the later part of my senior year of high school. The dance beats from the percussion and the swelling synthesizers was right in line to the type of music I was very into at the time. Flash-forward another dozen years, and this song popped up on one of the Rhino Records collections of 80's new wave music I was picking up. Thirty years after its release, I still hear it periodically on Sirius/XM's 1st Wave station.

"Cruel Heart" is next. It strips back some of the heavier electronic sounds to go for a more straightforward sounding pop song.

The record closes with the extended version of "Luxury", a danceable parable about what one wants versus what one needs.

I really enjoyed Dance Emotions a lot as I listened to the tracks for this review. Peter Godwin’s music would have fit right into my comfort zone in late 1982, which was danceable new-wave/alternative. It is a real shame that this one is not available for download digitally anywhere (I would gladly plop down some cash for it). Once more, I had to rely upon the goodness of people putting up YouTube videos created from their old vinyl collections to hear many of these songs. I look forward to the day this one shows up for digital release - here's hoping.
Posted by Martin Maenza at 4:30 AM