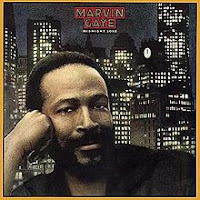 This month we celebrate the thirtieth anniversary of Midnight Love, the seventeenth studio album from American R&&B and soul singer Marvin Gaye. The October 1982 release went Gold in the UK where it peaked at number 10. Here in the US, the album sold Platinum three times over and reached number 7 on the Billboard Hot 200 and number 1 on the Billboard R&B album charts.

Rolling Stone magazine ranked it at number 37 on its list of the 100 Greatest Albums of the 1980's. Nominated for a Grammy in the category of Best R&B Male Vocal Performance, it was also the final album Gaye would release before his death in April of 1984.


Side one opens with "Midnight Lady", a funky jam with an irresistible beat (the later provided by James Gadson on drums). Gaye had stated that the song was influenced by the work of Rick James at the time; the lyrics even make a reference to "Superfreak", a huge dance hit by James. David Stout and the LA Horn Section provide the wall of sound on this one.

The smash hit "Sexual Healing" is next. In the US, this single about carnal celebration went to number 3 on the Billboard Hot 100 and number 1 on the R&B charts. It also hit number 37 in Italy, number 23 in Germany, number 17 in Sweden, number 7 in Ireland, number 4 in the UK and number 3 in the Netherlands. Rolling Stone magazine ranked it at number 233 on its list of the 500 Greatest Songs of All-Time. This is a classic jam, full of lust and steam; it was a mid-tempo tune that led to some bump-n-grind on the dance floors in the clubs back in the day.

Gordon Banks gives Gaye some assist on the bass on "Rockin' After Midnight". It continues the overall theme of desire and sex prevalent so far on side one.

The ballad "Til Tomorrow" stalled at number 78 on the US R&B charts. This one is pretty sparse, in my opinion, and not overly original. It follows the formula of quiet-storm R&B songs yet it fails to do anything impressive with the lyrics or the vocals. Joel Peskin provides the saxophone solo here.

Side two begins with "Turn on Some Music", a move back to the mid-tempo dance grooves again. The foreplay overtures are back in the lyrics too as he tells his woman to “put three albums on” so they can “make it long long”. This harkens back to the days when you had to stack up a couple albums on the turntable and let them drop one after the other. Ah, the things we lost when we moved to a digital age where play-lists are so much easier to compose.

Gaye goes a bit native with "Third World Girl", opening it up with some kind of tribal chant. Bobby Stern is featured prominently on the harmonica on the track.

As a single, "Joy" climbed to number 31 on the US R&B charts. This funk-influenced number has a strong spiritual element to it. I like that he pulled back a bit here and went for the pure emotional aspect of love over the physical one.

"My Love Is Waiting" charted at number 34 in the UK and number 45 in the Netherlands. The song was the final one recorded for the record and begins with Gaye thanking a number of people before the music kicks in. The lyrics tell of a man coming back to a former lover after spending time apart. Again, I like that he eased off a bit and went for a more subtle seduction here.

Beyond the big hit, I was very unfamiliar with Midnight Love until I did this review. There were certainly a couple tracks I found interesting enough to warrant repeat listens in the future. I am glad that Marvin Gaye was able to go out on top, with a record that brought him back to the commercial sales levels that his earlier albums from the late 60’s and early 70’s achieved.
Posted by Martin Maenza at 4:30 AM