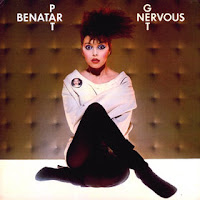 Today (October 29th) marks the thirtieth anniversary of Get Nervous, the fourth studio album from rocker Pat Benatar. This Platinum selling album peaked at number 73 in the UK, number 15 in Australia and number 4 on the US Billboard Hot 200 as part of its forty six weeks on that chart.

Benatar’s band had a change up with this release; Charlie Giordano joined the group on keyboards. The rest of the group continued to be Roger Capps on bass, Myron Grombacher on drums, and her newly-wed husband Neil Giraldo on guitars.


Side one rolls in with “Shadows of the Night”, the debut single from the album. It went to number 50 in the UK, number 32 in New Zealand, number 19 in Australia, and number 12 in Canada; in the US it peaked at number 13 on the Billboard Hot 100 and number 3 on the Mainstream Rock charts. I have always liked how this one opens with just her vocals for the chorus, followed by the band joining in for the first verse. Very dramatic. This is one that sounds great with the volume cranked, especially for Giraldo’s searing guitar solo. Trivia note: Rachel Sweet recorded a version of this song on her 1981 album ...And Then He Kissed Me, though she tweaked the lyrics from the original D.L. Byron composition.

The third single “Looking For a Stranger” only hit number 39 on the US Billboard Hot 100 but went all the way to number 4 on the Mainstream Rock charts. Grombacher lays out a great danceable beat here with quirky keyboards by Giordano thrown in too. The lyrics show Benatar’s girl-power strength as she goes on the prowl for some new and different action.

The heart-palpitating guitars on “Anxiety (Get Nervous)” really give the song that paranoid edge. This one blends the group’s normal rock sound with some great new-wave hooks.

The B-side for the second single was “Fight It Out”, a darker ballad about a troubled relationship. Benatar’s vocals cover the range of quiet vulnerability to thundering power a number of times in the four minute span of this track.

“The Victim”, with its pedal-to-the-medal tempo, was selected for the B-side of the first single.

Side two begins with “Little Too Late”; as the second single it rose to number 20 on the US Billboard Hot 100 and number 38 on the Mainstream Rock charts. The lyrics are about someone calling out a former lover, kicking them to the curb for not putting in enough effort into the relationship.

“I’ll Do It” served as the B-side to the third single. This is the one track on the album that the husband and wife rockers shared co-writing credits.

On “I Want Out”, Benatar once again is cast as the woman who finds herself in a failing relationship and ready to break away from the bad. Her inner strength to fight for her freedom is matched by the power of the band.

On “Tell It To Her”, Benatar changes it up a bit by taking on the role of the other woman in the love triangle.

Grombacher wrote the final track of the album “Silent Partner”; it features a number of change-ups on the drums. I also like the effect of Benatar’s vocals being echoed at the start.

Get Nervous is a strong rock record, building upon the foundation established by Pat Benatar on her previous releases. In 1982, a lot of these songs were played on the local album oriented rock station I listened to periodically. While I did not own a copy on vinyl, I did add it to my digital library a few years back. If you have read my earlier reviews of her work (click here and here respectively), you know I was an early fan of her work.
Posted by Martin Maenza at 4:30 AM