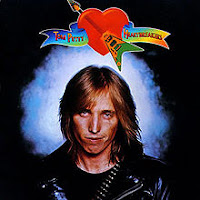 Welcome to another edition of Seventies Saturday. Today (October 20th) is a special one as we also celebrate the sixty-second birthday of Florida-born American rocker Tom Petty.

Petty and his band the Heartbreakers made their recording debut on the November 9th, 1976, self-titled release. Tom Petty and the Heartbreakers did not initially take off in the US; only after a UK tour and reaching number 24 on the charts there did it spark in the States (where it ultimately went to number 55 on the US Billboard Hot 200 in 1978). It also charted at number 57 in Australia and number 18 in New Zealand.


Side one opens with “Rockin’ Around (With You)”. This one has a mid-western rocking country sound to it thanks to the guitar work by Petty and co-composer Mike Campbell on the verses. The chorus interjects a bit a harder attitude to it, making for an interesting juxtaposition of sounds.

The debut single was “Breakdown” which charted to number 40 in both the US and Canada; the B-side varied in a number of markets. The song was also featured on the soundtrack of the 1978 film FM. This is the one track on the album where Jeff Jourard played guitar. I remember this one being a popular track on the album-oriented rock station we listened to out of Buffalo; I always liked the slinky urban rhythm to it.

“Hometown Blues” slides back to that rock-country sound that was very popular at the time thanks to groups like the Eagles. This track features Donald “Duck” Dunn on bass guitar, Randall Marsh on drums, and Charlie Sousa on saxophone.

Things slow down a bit with the ballad “The Wild One, Forever”.

“Anything That’s Rock ‘n’ Roll” was released as the second single in the UK, where it peaked at number 36. The opening immediately thinks of the Rolling Stones; it has a very similar sound to what they were doing in the early 70’s. The lyrics talk about being game for anything as long as it has that rock ‘n’ roll attitude to it.

Side two starts with “Strangered In the Night”, which was used as the B-side to the first single in Spain. This harder edged track features Emory Gordy on bass, Stan Lynch on keyboards and Jim Gordon on drums.

“Fooled Again (I Don’t Like It)” served as the B-side to the first single in the US. Like the second track on side one, this one has a gritty city feel to it; it would fit perfectly as a backing track on police drama (I can see the flashing red-and-blue lights atop the stopped squad car on a darkened, water-slicked street near the harbor front).

Petty seems to be channeling Mick Jagger on the vocals of “Mystery Man”; this is definitely a song I could hear the Stones performing.

‘Luna” served as the B-side to the first single in Germany. Lynch played the keyboards on this one as well, setting a mysterious tone of the rest of the song.

The final track “American Girl” was released as the final single from the album. While it stalled at number 109 on the US Billboard charts, it reached number 40 on the UK charts. Rolling Stone magazine ranked the song number 76 on its list of the 100 Greatest Guitar Songs of All-Time. This one has a great opening with a very catchy riff; it hooks you immediately and pulls you into the rest of the song. Oklahoma-born rockers Dwight Twilley and Phil Seymour both sang backing vocals on this one.

Back in 1976 when this album came out, I was all over my pop music and disco. As such, this one would not have been on my radar had it not been for my older brother. Being in high school at the time, he was all into the rock bands and certainly had this one on vinyl in his large collection of albums. He definitely helped me broaden my musical pallette in a variety of ways.

I find Tom Petty and the Heartbreakers to be a strong debut. Petty and his large ensemble of musicians are certainly paying homage to a number of artists with the variety of music styles. It certainly shows the potential of the band that would continue to develop over the late 70’s and early 80’s.
Posted by Martin Maenza at 4:30 AM