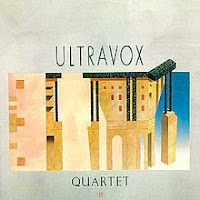 Today (October 15th) marks the thirtieth anniversary of the release of Quartet, the sixth studio album from the English band Ultra ox (it was also the third one to feature Midge Ure as the lead singer for the group). The record went to number 61 on the US Billboard Hot 200, number 38 in New Zealand, number 19 in Norway, number 13 in Germany and number 6 in the UK.


Side one opens with Chris Cross‘ cascading synthesizers on "Reap the Wild Wind"; they give the whole composition an appropriate atmospheric sound. As the first single, the up-tempo track hit number 71 on the US Billboard Hot 100, number 69 in Australia, number 12 in the UK, and number 10 in Ireland.

The opening of "Serenade" sounds awesome with headphones; the sound moves from channel to channel as it swells. Billy Currie on the piano is prominent here, giving the song a classical concerto element.

"Mine for Life" has a creepy, stalker edge to it. The lyrics are full of voyeurism; the music rides an anxious edge. It all works together perfectly.

"Hymn", the second single, hit number 15 in Ireland, number 11 in the UK, and number 9 in Germany. The song, the longest track on the album at close to six minutes in length, has a strong spiritual reverence to it with lyrics that reference passages from the Bible. Currie plays the violin on this one.

Side two begins with "Visions in Blue"; as the third single it reached number 25 in Ireland and number 15 in the UK. Its haunting tone reminds me a bit of “Vienna”, a hit by the group from a year prior.

"When the Scream Subsides" swings things to a more rocking side with a traditional guitar/bass guided track. This one has a Ure guitar solo.

The fourth and final single "We Came to Dance" went to number 22 in Ireland and number 18 in the UK. It is, of course, a synth-pop dance track driven by Warren Cann’s drums.

"Cut and Run" keeps the party going along a similar vein. The lyrics find the singer at a critical juncture with an important decision to make. Again, I like the fusion with a bit of classical piano and the more modern new-wave sound.

"The Song (We Go)" closes out the original vinyl on the up-tempo note. The percussion on this one is really booming; I like that.

Prior to this review, I was only familiar with the first track from Quartet. However, as is often the case while doing this bog, I found yet another amazing album that I want to add to my music library very soon. Ultravox was creating musical masterpieces at time, as evidenced by the tracks here. This is one that 80’s alternative music fans will definitely enjoy.
Posted by Martin Maenza at 4:30 AM