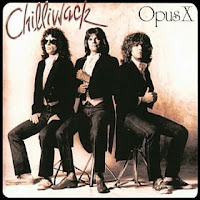 Hailing out of Vancouver, British Columbia, the Canadian rock band Chilliwack got their start in the late 1960’s. After five albums in the early 70’s that were known mostly only in their native country, they started to cross the border into the US in the later part of the decade.

In October of 1982, they released their tenth studio album Opus X. Today, we will take a look at that album in celebration of its thirtieth anniversary. This Platinum certified record went to number 12 in Canada and number 112 on the US Billboard Hot 200. At the time, the group consisted of Bill Henderson (vocals, guitars, and keyboards), Brian MacLeod (vocals, drums, guitars, and keyboards) and Ab Bryant (bass).


Side one begins with “Whatcha Gonna Do”, the first single from the album. It went to number 9 on the Canadian charts, number 41 on the US Billboard Hot 100 and number 29 on the US Mainstream Rock charts. It opens with a synth/guitar blend, followed by the harmony of Henderson and MacLeod. I fondly remember this one playing on the radio back in the day; it certainly fit right in with the sound prevalent on those early days of MTV as well.

“Secret Information” was the second single from the album; it stalled at number 110 on the US Billboard charts in 1983. This slower tune has a moody musical sound, thanks to heavier guitars and wispy keyboards, to go with the covert knowledge garnered by the singer in the lyrics. The local album-oriented rock station out of Buffalo used to play this one quite a bit as well.

“She Don’t Know” fools you with its opening. Is it a heavier number or a slow ballad? It turns into a mid-tempo number about a woman who is blissfully unaware of the guy who is madly in love with her. When this album came out, I was a senior in high school and this song fit perfectly for me and someone from my class I had a long-time crush on. When I finally acted upon it, I found out she was already dating someone else. Ah youth.

“Night Time” is an up-tempo track extolling that need for free-time releases.

“Lean On Me” is a mid-tempo song about being there as a supportive shoulder.

Side two opens with “Don’t It Make You Feel Good”, a track that reached number 48 on the US Mainstream Rock charts. This one definitely has a harder edge to it, sounding like early Mötley Crüe who made their recording debut a year prior.

With its carefree attitude “Really Don’t Mind” was the B-side to the first single.

The B-side to the second single was “You’re Gonna Last”. The first verse with just keyboards and vocals is kind of eerie, but the guitars fill in on the chorus and ground it a bit more.

The record closes with the ballad “Midnight”. I like the gentle guitar here.

Due to living on the south-east border of Lake Erie, we got a lot of exposure to music from our Canadian friends across the way. As a result, I was fairly familiar with a lot of tracks from Opus X in 1982 and 1983. The sound from Chilliwack was right in line with the AOR music of the day from groups like Journey, Foreigner and more.

I did not own this one on vinyl, but I did pick up the tracks via digital download in the early part of 2011. It is definitely one of those forgotten records from the early 80’s. Chilliwack gives a good bit of variety across the nine tracks, keeping it fresh and interesting.
Posted by Martin Maenza at 4:30 AM