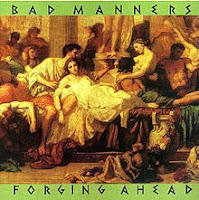 This year marks the thirtieth anniversary of Forging Ahead, the fourth studio album from the English 2-Tone/Ska band Bad Manners. It was also the group’s last on Magnet Records, the label they started out on. The 1982 album peaked at number 78 on the UK charts.


Side one begins with “That’ll Do Nicely”, the fourth and final single. It spent three weeks on the UK charts and got down to number 49. This song about having a laid back lifestyle has a lot of world-music influences to it. Have you ever heard Russian melodies done in Ska? You will if you listen to this one.

I like how the horns welcome us at the start of “Salad Bar”, a jamming dance track.

“Tonight Is Your Night” is another upbeat track, this time with a positive affirming lyrical message.

The single version of “Sampson and Delilah” spent three weeks on the UK charts, reaching only number 58. The album cut is a longer version, dubbed the “Biblical Version”; it features extended instrumental sections that were cut from the single release. The lyrics compare a couple’s relationship to infamous ones over the centuries. I remember hearing this one on the college radio station I listened to back in 1982. Like so many other new-wave tracks, this one came back in my life in the mid-90’s thanks to a Rhino Records collection.

The group does their own interpretation of “Exodus”, the instrumental title theme from the 1960 Otto Preminger film of the same name. Of course, their Ska style gives it a slinky, sexy sound.

“Got No Brains”, the first single, spent five weeks on the UK charts and peaked at number 44.

Side two opens with “My Girl Lollipop (My Boy Lollipop)”, the second single, spent seven weeks on the UK charts and rose all the way to number 9. The original version of the song was written in the 1950’s by Robert Spencer of the doo-wop group the Cadillacs and was first recorded in 1956 by Barbie Gaye. It bounces along on a great beat provided by the drums, guitars and horns.

“Falling Out of Love” is the first track to feature a group of female singers in a call-respond delivery on the lyrics.

“Seventh Heaven” reminds me a little bit of a tropical vacation, which seems to be what our family has been doing a lot these past few years. I guess it works out well that we all like the sun and water-based activities (swimming, snorkeling, etc.).

I like the way the singers pronounce the two words in the title of ”Educating Marmalade”, it is almost done in a mocking way to put down those who turn their noses down on others. Just listen to that building laughter as the track nears its end.

“What’s Up Crazy Pup” is a tune written by Van Morrison. Bad Manners plows through it on overdrive, completing it in less than two minutes.

The album closes out with a track simply entitled “Your”. It changes up its tempo a number of times as it goes from verse to chorus and back again.

The 80’s was when I first got into Ska music. There were so many great groups doing it: the Beat/English Beat, Madness, the Specials, and, of course, Bad Manners. It is something about the combination of the horns, the percussion and the beat that always seems to put me in a good mood. Forging Ahead is another one of those hard to find musical treasures that seems to have only come out on vinyl.
Posted by Martin Maenza at 4:30 AM

Very good album review, It's nice to see somebody taking time out for Bad Manners for a change. Forging Ahead is indeed a great album from the 1980s.

Thanks for reading and the comments. I also appreciate the info on the CD release. Now, if I could just find it for digital download somewhere... hopefully soon.