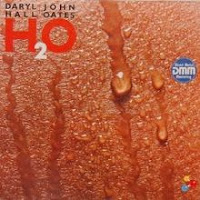 Coming off their 1981 smash Private Eyes (click here for that review), Daryl Hall and John Oates proved they had the momentum as Platinum selling artists. Their next release, their eleventh studio album which is celebrating its thirtieth anniversary today (October 4th), was H2O.

The album went to number 3 on the US Billboard Hot 200, the highest rank of any of their albums on that chart. It also went to number 24 in the UK. A number of singles were released from it, including another number 1 and one of their biggest hits.


The original vinyl release sported a front cover by American photographer Hiro (a close up shot of water over human skin). Subsequent CD releases used the profile portrait of the guys that appeared on the original’s back cover. 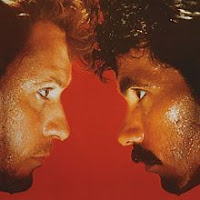 Side one opens with the smash hit “Maneater” which spent four weeks at the number 1 spot on the US Billboard Hot 100. I owned this one on a 45 back in 1982 and would dance around my bedroom, in a jerking sort of way, as it played on the turntable. I have always liked that opening with the guitar and drum followed by the haunting saxophone; they set the urban mood for the song perfectly.

“Crime Pays” continues along a similarly danceable vein with another solid instrumental opening, this time with synths. This one has a definite R&B vibe to it thanks to Tom “T-Bone” Wolk’s funky bass. The lyrics use the analogy of lawbreaking to describe heartbreaking.

“Art of Heartbreak” was the B-side to the second single. I like the saxophone counterpoint on the chorus, done brilliantly by Charlie “Mr. Casual” DeChant. It adds a whole sexiness to the tune.

“One on One”, the second single, gained a lot of exposure in the mid-80’s thanks to being used in NBA commercials. How can you not hear it and visualize someone going for the hoop? The mid-tempo sway to it made for a good slow dance song back in the day, and, hey, there is another DeChant sax solo.

“Open All Night” was used as the B-side to the third single. The man in the song accuses his woman of sleeping around after hearing stories nocturnal activities.

Side two begins with “Family Man”, a song recorded in 1982 by co-writer Mike Oldfield for his album Five Miles Out. Hall and Oates released a version as the third single from the album which went to number 15 in the UK and number 6 on the US Billboard Hot 100. This is actually my favorite of the singles from the album; I remember the video very well from the early days of MTV. I really like the musical hooks here. The lyrics mirror in a way the predatory elements of “Maneater”.

Oates takes the lead vocals for the first time on the record with “Italian Girls”. It makes for a nice change of pace by this point.

“Guessing Games” harkens back to earlier hits from the duo. It cuts back on the synthesizers a bit and relies a bit more on the vocal harmonies.

The B-side to the first single was “Delayed Reaction”. I used to play this side of the single a good bit too; I liked the stronger, rocking rhythm to it.

“At Tension” uses a different kind of rhythm to create an anxious feel. The title plays on the sound alike to the word attention in an interesting way.

“Go Solo” closes out the record on a slower tempo with yet another song about breaking up and taking time to spend alone finding oneself.

With H2O, Hall and Oates continued to build their following with my generation in the early 80’s. By this point in 1982, I was already a fan of their music. While I did not have this one on vinyl, I knew the singles quite well from the radio airplay. A number of years ago, I downloaded this one for my music library and it has been in active rotation ever since.
Posted by Martin Maenza at 4:30 AM