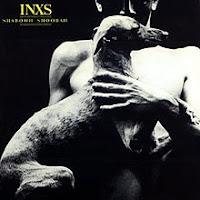 This month we celebrate the thirtieth anniversary of Shabooh Shoobah, the third studio album from Australian rockers INXS.

Besides hitting number 5 in their homeland (and spending a total of 94 weeks on those charts), this was the first album by the band to be released worldwide. In the US, it became a Gold seller and reached number 46 on the Billboard Hot 200.


Side one opens with “The One Thing”. As the second single, it went to number 31 in Canada, number 30 on the US Billboard Hot 100, number 14 in Australia, and number 2 on the US Mainstream Rock chart. It opens with that steady drumbeat by Jon Farriss and the guitars by his brothers Andrew and Tim that set the pace for the rest of this number. I remember this song being a big party hit for the next few years afterwards. It really got everyone up and dancing. And, of course, I like the sax solo by Kirk Pengilly.

The third single “To Look at You” peaked at number 36 in Australia. Andrew’s keyboards on the start of this one are soft, haunting in the background, but later build. The song is full of feelings of infatuation, succinctly delivered by Michael Hutchence’s vocal style.

“Spy of Love” has a slinky rhythm, perfect for a song about lovers meeting secretly and trying to avoid detection. Unfortunately, as the opening verse says, “it gets around this old town”.

“Soul Mistake” is a mid-tempo song about a break-up and going over the mistakes made that led to it.

“Here Comes” seems to follow nicely the last track as the man moves on with his life. It has a decent dance beat and a funky Garry Gary Beers bass riff to boot.

Side two begins with “Black and White”. As the fourth single, it charted at number 24 in Australia in 1983. I like the quick-step tempo to it.

“Golden Playpen” is about a drunken night on the town, trying to forget about the troubles of the day. Pengilly gives another soulful sax solo here.

“Jan’s Song” is about a woman dedicated to her causes, trying to make the world a better place through protests and demonstrations. The music has a slight reggae rhythm to it.

“Old World New World” seems to be a song about people seeking answers in various ways, some of them as old as time and some more new age.

The final track on the album was also the second single. With its chilling opening, “Don’t Change” only reached number 80 on the US Billboard Hot 100, but it thundered its way up to number 17 on the Mainstream Rock chart. In Australia, it went to number 14. This one too was a great party favorite with a driving upbeat tempo. It is also one of those songs I just want to crank up the volume for when it comes on the car radio.

In late 1982 and early 1983, I was familiar with the hits from Shabooh Shoobah that climbed up the US Billboard charts. It was not until I got to college in the fall of 1983 that I realized how big of a following the group had. It was guaranteed that at least once a quarter one or more of the fraternities or floors would have a party theme based on the group’s album or song titles (complete with huge banner posters that recreated album artwork).
Posted by Martin Maenza at 4:30 AM