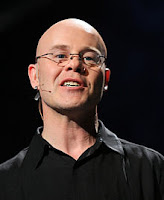 Born in London, Thomas Morgan Robertson got his first start in music in the choir when he around 10 years old. He soon learned how to play guitar (with folk tunes) followed by piano (which included an interest in jazz). He got into synthesizers in the middle of the 1970's and that changed his musical direction yet again.


He first acquired the nickname "Thomas Dolby" around age 13 as he had an interest in keyboards and tape machines that came from Dolby Laboratories. He ended up taking that as his stage name.

Besides his own album, Dolby has worked with a huge list of other artists as a studio musician, songwriter or producer. These include Belinda Carlisle, David Byrne, Def Leppard, Foreigner, Joni Michell, Lene Lovich, Peter Gabriel, Prefab Sprout, the Thompson Twins and more.

Here are quick links to some of his albums I have reviewed to date:

For his 1982 debut The Golden Age of Wireless, click here.

For the 2011 EP Oceanea, a part of the A Map of the Floating City album, click here.
Posted by Martin Maenza at 4:30 AM