The Kids From "Fame" - Songs 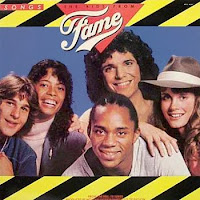 Welcome to another edition of Soundtrack Sunday. Usually that means going to the movies, but today we will go to the small screen and a show about big dreams. Before there was Glee, there was Fame - one of my favorite shows from the early part of the 80’s (I never missed an episode).

With a strong showing in sales for the debut release (click here for my review of that album) and the start of its second season on NBC, it was no surprise that the Kids From “Fame” would return with another album. Songs was released in October of 1982 with more music taken from season 1 and early season 2 episodes.


Like the first album, this one made a big splash on the UK charts. Under the name of The Kids From Fame Again, it reached number 2 on the British charts.

The album featured a wrap-around cover with the entire cast. When you opened it, you had a gatefold shot of the kids dancing in the streets of New York City with inserts of each of the show’s stars.

Side one begins with “Be Your Own Hero”, sung by Erica Gimpel. The lyrics are motivational with a message about finding one’s own inner strength for inspiration.

Debbie Allen is next with “Just Like You”. The music is full of funk and soul with a solid dance beat; it sounds like something you would have heard from Earth, Wind and Fire.

Allen is joined by Albert Hague on “There’s a Train”, an old-fashioned ballad. Hague, a gifted composer himself, played piano on the number.

“Mannequin” by Gene Anthony Ray features of Calypso-like rhythm. Released as a single, it went to number 50 on the UK charts. In the episode, Lori Singer plays a store window dress-model that comes to life and dances with Ray. This was a half-decade before Hollywood turned the same idea into a full length film with the same title that starred Andrew McCarthy, Kim Cattrall, Mescach Taylor, James Spader and Estelle Getty.

Lee Curreri and Allen sing a duet on “Could We Be Magic Like You”. The song, written by Curreri, was featured in an episode about a newborn infant being left on the doorstep of the School for the Performing Arts. The lyrics of this lovely ballad are about the wonder of the world through innocent eyes.

Ray is back with the jazzy “Lay Back and Be Cool”. I remember this one from the show as well as it featured an elaborate dance number with sharp costumes and all. The electric guitars on the bridge try to give the number a bit more of modern edge. It definitely had a rhythm that was irresistible; I end up bopping my head and tapping my feet every time I hear it.

Side two opens with the title track “Songs”. Carlo Imperato duets with Gimpel on this one, even though guest star Jimmy Osmond also sang it in a number on the episode.

Allen returns with another funky groove called “Body Language”. As a single, it hit number 76 on the UK charts. This one was used for the aforementioned dancing in the streets scene from the beginning of season 2. The music features full strings in a classic 70’s disco sense as well as some wailing electric guitars to bring it into the 80’s.

Valerie Landsburg sings the ballad “Beautiful Dreamer” to another wonderful piano and strings accompaniment. This song always touches me whenever I hear it; Landsburg really brought out the emotion of the lyrics with her voice.

Allen keeps things on the slow side with the ballad “Dancing Endlessly”, an intimate love song.

Gimpel closes it out with the high energy “Bet Your Life It’s Me”. As was often the case with her character of Coco, this song was all about self-promotion and belief in one’s abilities. It makes for a nice bookend to the opening track on side one.

Like the first album from the Kids From “Fame”, I owned a copy of Songs on vinyl and played it constantly for the next couple of years after it was released. Although my old vinyl is long gone, the memories of this one still remained in my brain. A few years ago I got to revisit them via the DVD release of seasons 1 and 2 of the show. While not a digital release of the full album, it did bring back the nostalgia factor for me.
Posted by Martin Maenza at 4:30 AM

Thank you for the "Hat Tip" Martin. xo Valerie

You are most welcome, Valerie. So glad that you visited the blog for a read and to comment. It is always appreciated.