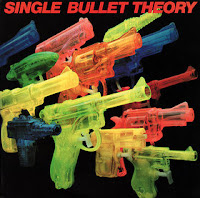 The group that would be known as Single Bullet Theory got its start in 1976 in Richmond, Virginia, under the name of X-Breed. After an EP release in 1976 and touring as the opening act for Patti Smith in 1979, the group finally signed with CBS records and put out their first full-length album.

This month marks the thirtieth anniversary of the 1982 Single Bullet Theory record.


Side one opens with “Keep It Tight”, the first single. Popular on MTV, the song climbed to number 78 on the US Billboard Hot 100. It has a bouncy beat to it, supported by the keyboards of Barry Fitzgerald, which makes it a light pop number. This track first crossed my collection thanks to the Rhino Records compilation series Just Can’t Get Enough: New Wave Hits of the 80’s.

“Hang On To Your Heart” was slated to be the group’s second single, but the label pulled it at the last minute. Singer Michael Maurice Garrett portrays the guy determined to win the love of the woman he desires.

The next track “A Blink of an Eye” talks about how life can change in a single instant. It goes from a rocking start to a strong synth ending.

“Das Madchen” tells the tale of a girlfriend’s detailed dream.

Side two begins with “There Is the Boy”, an up-tempo boy-meets-girl story.

“Too Hot to Handle” with its rapid-fire rhythm pays tribute to a knockout babe.

“Neutralizer” is a strong deep cut, very much in the new-wave style. Garrett also has a saxophone solo on this one.

“Anxious” keeps up that similar sound with a toe-tapping beat driven by Dennis Madigan on drums.

The album closes with “Dead End Again”, a mid-tempo track full of contemplation and a little regret.

After the release of the album and the first single, the Single Bullet Theory began to dislike the label’s lack of support. After touring with the Romantics, the Pretenders and Simple Minds, the group disbanded.

Once again, we have another example of an album no longer available for consumption. Single Bullet Theory only came out on vinyl; as the band only released one full-length album there were no compilations to come out during the CD era. It is a decent pop-rock album of the 80’s which I would love to see show up on the digital download market. However, given how they were discarded quickly by CBS back in the day, I find it highly unlikely we will see this one surface any time soon. That is a shame.
Posted by Martin Maenza at 4:30 AM