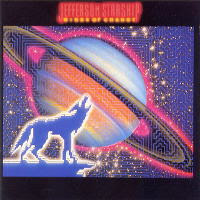 Awhile back, someone I converse with on Twitter pondered how a band could go from "White Rabbit" to "We Built This City". The answer would be part of the transition from Jefferson Airplane to just Starship and that would include the middle period of Jefferson Starship.

Yesterday (October 4th) marked the thirtieth anniversary of the release of Winds of Change, the seventh studio album by the group under the name of Jefferson Starship. It was also the first album since the return of Grace Slick to the group. It reached number 26 on the US Billboard Hot 200.


Side one begins with the title track. "Winds of Change" hit number 38 on the US Billboard Hot 100 and number 18 on the Mainstream Rock charts when released as the second single. With Slick back on vocals, songs like this one helped to recapture to the group’s earlier sound. The lyrics warn that in life even the best laid plans are subject to alteration - so be prepared.

"Keep on Dreamin'" has a definite 80’s sound to it though, bringing to mind the likes of Journey or REO Speedwagon. That is not a bad thing in and among itself; it certainly would have be right at home on the album-oriented rock stations with those groups. Lyrically, the song is full of optimism and hope for a brighter tomorrow.

"Be My Lady", the first single, went to number 28 on the US Billboard Hot 100 and number 33 on the Mainstream Rock charts. The song has a bit of a Motown feel to it, swaying gently behind a piano-based melody.

The ballad "I Will Stay" is about choosing to stick around in a difficult relationship has a lovely piano-based opening and a searing guitar solo.

"Out of Control" did not have a single release but did have a music video that aired on MTV and other outlets. Married at the time, Slick and Paul Kantner solicited song writing input from their then eleven-year old daughter China. The result is a high-energy rocker with a dark, manic mood. It is actually one of my favorites from the deeper cuts as it has an alternative, new-wave edge to it.

Side two opens with "Can't Find Love", the third single; it climbed as high as number 16 on the US Mainstream Rock charts. It opens with a slow, desperate tempo before kicking it into gear on the first verse. The lyrics deliver the obvious message that people can't find love when they are spending time all by themselves.

"Black Widow" gives off the predatory vibe right out of the gate with the intro, followed by Slick's aggressive yet tempting vocals. I like the repeated guitar riff on this one.

"I Came Back From the Jaws of the Dragon" seems more like a throwback to late 70's progressive-rock, from the guitars to the vocal harmonies.

"Quit Wasting Time" closes the album with strong rocker about getting feelings out in the open right away, so time is better spent rather than wondering what-if and does-he/she. Life is too short for games.

Winds of Change, for me, still has a good bit of the classic Jefferson Airplane sound to it. Granted, it was 1982 with the music video era growing out of its infancy. Sounds from many of the classic bands of the 60's and 70's were evolving to fit the new sub-genres of rock at that the time. This album is definitely part of the band's change for a new decade, very appropriate for an album with that tile. Most of my exposure to this one thirty years ago was from the radio, either the hit singles or the occasional rock block on the album-oriented rock station. While it was not the type of music I was listening to back in the day, I can certainly appreciate it a lot more today with an older, wiser perspective on things. I enjoyed listening to it for this review.
Posted by Martin Maenza at 4:30 AM