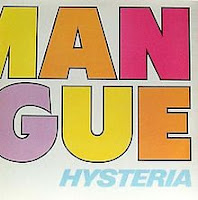 After the highly successful 1981 album Dare, a key album in the new-wave synth-pop movement (click here for my review), the British band had a hard time getting the next full-length album going. They put out a couple EPs including 1983's Fascination! (click here for that review) during the interim. Finally, on May 7th of 1984, they released their fourth studio album Hysteria.


The album did go Gold in the UK where it topped out at number 3 on the charts. Elsewhere it peaked at number 62 on the US Billboard Hot 100, number 44 in Germany, number 43 in Canada, number 16 in the Netherlands, number 9 in New Zealand and number 6 in Sweden.

Side one opens with "I'm Coming Back", a dance groove with a harder edge too. This was definitely an indication that the band was mixing things up a bit with their sound, growing and evolving it.

"I Love You Too Much" was a re-recorded version of a track from Fascination!. The sound this time is a little more stripped down and raw.

"Louise" was the third single from the album; it went to number 13 in the UK and number 7 in Ireland. The lyrics tell of a man who meets up with a former lover on a bus, and he begins to have delusional fantasies about them getting back together again. The synthesized brass section adds to the whole sad tone of the tune.

The first single released from the record was "The Lebanon". While it failed to gain major chart-play in North America (number 78 in Canada and number 64 on the US Billboard Hot 100), it fared well in Europe (number 18 in the Netherlands, number 11 in the UK and number 4 in Ireland). The opening bass guitar riff by Ian Burden heralds the rocking sound of the tune. The politically charged lyrics focus on the Lebanese civil war at the time.

Side two begins with "Betrayed", a somber tune that feels like a resignation of spirit. It speaks of money being gone and people moving on. Could this have been a statement by the group about their label in relationship to the previous few years?

The B-side to the third single was “The Sign". Here we get a bit of optimism in an upbeat tune; it makes a good counterpoint for the previous track.

Despite heartbreak, "So Hurt" has a message of perseverance. That which hurts you can sometimes make you stronger.
"Life on Your Own", the second single, charted in New Zealand (number 45), the UK (number 16) and Ireland (number 15). This track about moving on after a break-up features a heavy drum machine and synthesizers.

"Don't You Know I Want You", the final track, is a reworked version of "Total Panic!" the instrumental B-side to the single "(Keep Feeling) Fascination" from a year prior. It closes the record on an up-tempo, danceable note while the lyrics explore that zone of being friends but wanting more.

Hysteria definitely has a controlled, almost constrained feel to it. While the focus on the danceable beats is there, the feeling of joy and energy seem in short supply this time around. This is definitely one by the Human League that might require additional listens to appreciate more.
Posted by Martin Maenza at 4:30 AM