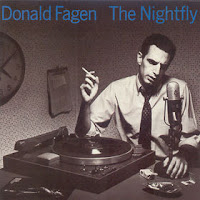 This week (October 29th) marks the thirtieth anniversary of the release of The Nightfly, the first solo album from Steely Dan founder Donald Fagen. This 1982 record went Platinum in both the US and the UK. Chart-wise, it peaked at number 44 in the UK, number 16 in the Netherlands, number 9 in New Zealand, number 8 in Sweden, number 11 on the US Billboard Hot 200 and number 24 on the Billboard R&B charts.


The songs on the record tend to be of a more autobiographical nature. The linear notes even suggest this, indicating they represent the fantasies of someone very much like Fagen growing up in the late 50’s and early 60’s.

Side one opens with “I.G.Y.”, a song whose title refers the International Geophysical Year. This was an event that ran from the middle of 1957 to the end of 1958 that promoted collaboration among the world’s scientist. As the first single, it reached number 26 on the US Billboard Hot 100, number 17 on the Mainstream Rock chart, and number 8 on the Adult Contemporary chart. It was also nominated for a Grammy Award for Song of the Year, losing to Willie Nelson’s “Always on My Mind”. The song about an optimistic future opens with a synth riff that is soon joined by a steady beat and dreamy horn section.

“Green Flower Street” continues the synth-jazz fusion sound and throws in a snappy rhythm to boot.

“Ruby Baby” is a 1956 song written by Jerry Leiber and Mike Stoller, first recorded by the Drifters. Fagen released his cool, laid-back cover as the third single from the album.

With its sleepy slow tempo, “Maxine” was selected as the B-side to the second single. The lyrics tell of a couple’s meeting at a local shopping mall as they try to figure out their relationship.

Side two begins in a “New Frontier”, the album‘s second single. The up-beat tempo and the harmonica bring to mind a train rolling along through the night.

“The Nightfly” pays homage to the late-night deejays spinning jazz and have deep discussion until the sun was peaking over the horizon.

I like the many layers of percussion on “The Goodbye Look”. It gives the track a tropical vibe.

The final track of the album “Walk Between Raindrops” was also the B-side to the first single and the third single. The organ really stands out on this one.

Back in 1982, The Nightfly was probably a bit too sophisticated for my teenaged palette. I would not have appreciated the superior production qualities and the richly layered compositions. At the time, I did not want to listen to laid-back music.

Today, though, I definitely enjoy the musical elements that Donald Fagen put into this record. It is one that I think would be great to listen to in a dimly lit room with a glass of a good wine. This album is music to unwind to.
Posted by Martin Maenza at 4:30 AM

I, too, LOVE this album. The songs, the instrumentation, the production, the whole vibe. The brief story of my introduction to the album can be found HERE.

FYI: Howard Jones recorded a pretty faithful cover version of "I.G.Y." for his Best Of album in 1993. Listen on Spotify

For a female vocal take on that song, check out The Moleskins!