KISS - Creatures of the Night 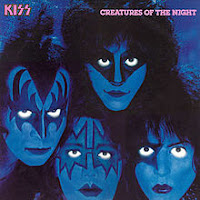 Today (October 13th) marks the thirtieth anniversary of Creatures of the Night, the tenth studio album for KISS. It was the last with Ace Frehley credited as a member (until 1998's Psycho Circus) even though he did not play on the record and the first album for lead guitarist Vinnie Vincent who would officially join the band on the next album.


It was also their final album on Casablanca Records, the label they had been on since their debut in 1974. They dedicated it to the memory of Neil Bogart, Casablanca's founder who had passed away in May of 1982 while they were recorded. The album reached number 45 on the US Billboard Hot 200; around the globe, it charted at number 42 in Germany, number 33 in Australia, number 31 in Norway, and number 22 in both Sweden and the UK.

Per usual, Paul Stanley and Gene Simmons divided up the lead vocal duties. Whoever was involved with writing the track ended up singing the lead on it.

Side one roars in with the thundering drums and screaming guitars of "Creatures of the Night". It was the B-side to the first single and then released six months later as an A-side of a single in the UK where it charted at number 34. Steve Farris played lead and Mike Porcaro played bass on this track.

"Saint and Sinner" has a mid-tempo swagger to it. With lead sung by Simmons, the track paints the picture of an encounter between two opposites.

"Keep Me Comin'" is a sexually charged mid-tempo rocker. There is a decent instrumental bridge in the later part of the song that gives the guys a chance to cut loose.

"Rock and Roll Hell", co-written by Simmons and Canadian rocker Bryan Adams, is full of frustration. The lyrics almost sound like a plea to escape the rough years the band had been having previously.

"Danger" closes out the side with another Stanley collaboration with Adam Mitchell, who worked with such artists as Merle Haggard, Nicolette Larson and Olivia Newton-John as well. Bob Kulick played lead guitar and Jimmy Haslip played bass on this track.

Side two opens with the proclamation "I Love It Loud"; Vincent co-wrote the track, along with two others on side two. This first single was released on the same day as the album, and it charted at number 76 in Australia, number 45 in Canada and number 22 on the US Mainstream Rock charts (it stopped just short of the US Billboard Hot 100 at the number 102 spot). It has a fake-out ending at around three and a half minutes, only to swell back up for another forty-five seconds.

"I Still Love You" is the first slow ballad on the record, giving Stanley that impassioned moment to reach out to the female fans. It is the longest track on the record, clocking in at just over six minutes.

"Killer" was released as a second single a month after the album launch. Vincent shows off his lead guitar licks on this one.

"War Machine" closes out the album.

I found Creatures of the Night to be a good album with the usual KISS rocking sound. I think part of the problem any band has when they have been in the business for a decade is trying to balance what came before and keeping things fresh. This album does have a lot of the original band sound but falls short on making major memorable moments of its own.
Posted by Martin Maenza at 4:30 AM

I love this album. It totally blew me away when I first heard it, especially after the ill-advised Dynasty, Unmasked, and (Music From) The Elder. Kiss finally came home. I rank this in their top five best albums.

Vinnie Vincent joined the band for this tour, and had his own make up design (a gold Egyptian ankh). The US tour was a disaster attendance wise, although the Detroit show had an excellent turnout.