Musical Youth - The Youth of Today 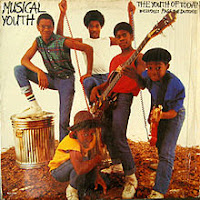 Formed in an inner-city school in Birmingham, UK, Musical Youth consisted of two sets of brothers - Michael (keyboards) and Kelvin (guitars) Grant and Patrick (bass) and Freddie “Junior” (drums) Waite - and their lead singer Dennis Seaton. The Waite boys were the sons of Frederick Waite of the Jamaican group the Techniques; he also wrote a number of the songs for the group in the beginning.


This month marks the thirtieth anniversary of the release of The Youth of Today, the debut album from these talented young men. The record went Gold in both the UK and Canada. Chart-wise, it reached number 8 in Canada, number 13 in France, number 23 in Germany and the Netherlands, number 24 in the UK and number 42 in New Zealand. Here is the US, it climbed all the way to number 23 on the Billboard Hot 200.

Side one opens with the smash hit “Pass the Dutchie”. This Grammy nominated debut single reached number 10 on the US Billboard Hot 100 and number 8 on the Billboard R&B chart. Around the world, it went to number 2 in Austria and Germany, and number 1 in Canada, Ireland, the Netherlands, New Zealand, Switzerland and the UK. The song is based on the Mighty Diamonds track “Pass the Kouchie” which was about recreational marijuana use. Waite removed all the drug references and changed the word in the title to “Dutchie” which is a cooking pot (a Dutch oven) in Jamaica.

The final single “Heartbreaker” on charted in the UK, at number 44. This mid-tempo track is warning about a woman who loves and leaves men.

“Gone Straight” is next. It, along with “Rub ‘n’ Dub” from side two, was omitted from later releases of the record. That made it impossible for me to find the track again for this review, much to my dismay.

“Blind Boy” is about a troubled youth who fails to listen to those people who can help keep him on the straight-and-narrow path.

The title track “Youth of Today” was released as the second single. It hit number 29 in Germany, 19 in New Zealand, number 13 in the UK, number 9 in Ireland and number 4 in the Netherlands. The message of this song was targeted at my parents’ generation, telling them that the problems of the world were not caused by my generation but we might likely be the ones to help solve them.

Side two begins with “Young Generations” and follows up logically from the end of the first side. It is a call to arms of their age group.

“Mirror Mirror” speaks of the confusion and turmoil of the times, wondering what tomorrow will bring.

“Children of Zion” reminds me a bit of Bob Marley. It is one of my favorite of the deeper, non-single tracks from the album.

“Never Gonna Give You Up”, the third single, charted at number 6 and number 5 in the UK and Ireland respectively. The song is about two people that seem to be incompatible yet are still in love. The young man professes his long term commitment to her. I think this one is probably the most underrated of the singles; it should have done really well with the right amount of promotion.

As indicated by the title, “Rub ‘n’ Dub” spotlights the rub-a-dub style of the Jamaican reggae music genre. The vocals are done in the toasting style, an improvised speaking vocal that was a pre-cursor to rap.

“Schoolgirl” closes the album. The young man tells of a girl at school who he is attracted to but is way out of her league. He resolves not to fall in love with her for fear that the sentiment will never be returned.

I picked up a copy of The Youth of Today on vinyl in late 1982, just on the strength of their debut single. I really liked the reggae sound of the music and the idea that these were young men around my own age (the band members at the time ranged from eleven to sixteen) making it. While not one I played a lot of, there were definitely tracks on it I would pick and chose to listen to. It certainly made reggae music much more accessible to the youth of my generation of the day.
Posted by Martin Maenza at 4:30 AM

Great indepth review Martin. I can agree with your conclusion, though as a huge fan I do like this to bits. I prefer the 'deeper' reggae tracks and non album cuts, plus the remixes and b-sides over most of the singles.

Not to forget that the boys (co-)wrote many songs and actually played their instruments. If you consider their age at the time, you can only conclude that they were actually very talented.