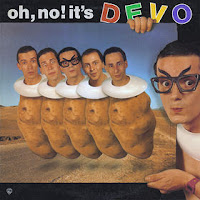 Happy Halloween, readers. Are any of you going to a party in a potato costume?

Today we celebrate the thirtieth anniversary of Oh No! It’s Devo, the fifth studio album from Devo. It went to number 57 in Australia and number 10 in New Zealand; here in the US it climbed as high as number 47 on the Billboard Hot 200. By this point, the Akron, Ohio, band had moved more to a synthesizer-based electronic sound.


Side one opens with “Time Out for Fun”, a suggestion that everyone needs a bit of relaxation each day to unwind and chill out. The opening sounds like something right out of a 16-bit video game that was the cutting edge back in 1982. And I like how Alan Myer’s drums ping-pong across the speaker channels.

The first single “Peek-A-Boo!” stalled at number 106 on the US Billboard charts; however it did climb all the way to number 13 on the Dance charts. The song takes a simple game one would play with a baby and gives it a whole creepy, stalker edge to it.

“Out of Sync” is the tale of a woman who has lost focus and is out of step with the world around her.

“Explosions” has a real danceable beat. It does however remind me of hanging out in the arcades back in 1982 with my best friend John, playing Tempest or Defender where explosions were a big part of the games.

“That’s Good”, the second single, equally stalled at number 104 on the main Billboard charts however fared quite well on the US Billboard Dance charts, reaching number 6. I remember the episode of Square Pegs that included the students at the dance bopping around to this tune. As that show ran while I was also in high school, this song definitely takes me back to those times.

Side two begins with “Patterns”, a behavioral analysis session.

“Big Mess” is an adaptation of a letter from a music fan called Cowboy Kim who apparently bordered on schizophrenia.

Devo takes on “Speed Racer”, a 1960’s Japanese TV anime. The lyrics are a mocking view of stereotypes from those kinds of programs.

“What I Must Do” is next. This one really does not do much for me.

The lyrics from “I Desire” were taken from a poem written by John Hinckley Jr., the man who attempted to assassinate President Ronald Reagan in an attempt to get the attention of actress Jodie Foster. This sparked some controversy for the band at the time.

The album closes with “Deep Sleep” which devotes a third of its length on an instrumental opening.

Back in 1982, Devo was very popular on the local college radio station. My exposure to at least half of the tracks from Oh No! It’s Devo came from the student deejays there.
Posted by Martin Maenza at 4:30 AM

Not my favorite Devo album, but still ok. Devo is still one of my favorites.