Phil Collins - Hello, I Must Be Going! 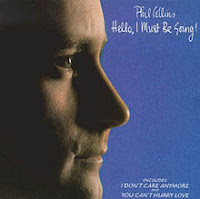 To follow up his highly successful solo debut Face Value (click here for that review), Phil Collins released Hello, I Must Be Going! in the fall of 1982. Today (November 1st) is the thirtieth anniversary for the album.

With a title that came from a song in the Marx Brothers' 1930 comedy Animal Crackers, this one too was a multi-Platinum seller. It charted at number 20 in New Zealand, number 15 in Australia, number 8 on the US Billboard Hot 200, number 7 in Sweden, number 6 in Germany, number 4 in Norway, number 3 in the Netherlands, number 2 in the UK and number 1 in Canada.


Side one begins with "I Don't Care Anymore", the third single from the album; it went to number 39 on the US Billboard Hot 100 and number 3 on the Mainstream Rock chart. What I have always enjoyed about this song is how that musically it is so stripped down. It is just Collins on keyboards, drums and vocals with Daryl Stuermer on guitars. Simple yet highly effective.

The up-tempo "I Cannot Believe It's True", released as a single only in the US, stalled at number 79 on the Billboard Hot 100. Don Myrick performs the saxophone solo and is supporting by the rest of the Phenix Horn section (known for playing with Genesis and Earth, Wind & Fire).

"Like China", a song about a teenager trying to convince his virgin girlfriend to become intimate, went to number 17 on the US Mainstream Rock chart. Collins sings this one with a British Cockney accent as if playing a character.

As the B-side to the first two singles from the album in the US, "Do You Know, Do You Care?" charted at number 41 on the Mainstream Rock chart. Collins plays the trumpet on this dark, brooding track.

In 1966, the Supremes recorded "You Can't Hurry Love", written by Holland-Dozier-Holland; they took the song all the way to number 1. Collins' version was released as the second single from the album where it too hit number 1 in Ireland, the Netherlands and the UK; it also reached number 3 in Australia, Austria, Germany, France and Switzerland. Here in the US, it went to number 10 on the Billboard Hot 100, number 9 on the Adult Contemporary chart and number 24 on the Mainstream Rock chart. This one cropped up a lot at dances and parties in the years following its release; it was so up-beat and fun with a great beat.

Side two starts with the amazing horns of "It Don't Matter to Me". I like the carefree attitude of this song, both musically and lyrically.

"Thru These Walls", a song about a voyeuristic man listening to his neighbors through the apartment wall between them in order to himself get off, was the first single from the album. It only reached number 56 in the UK, number 48 in the Netherlands, number 34 on the US Mainstream Rock chart, number 27 in Ireland and number 15 in France. The music gives it a sufficiently creepy tone that sets the mood perfectly.

As a single, "Don't Let Him Steal Your Heart Away" peaked at number 45 in the UK and number 18 in Ireland. After so many drum-dominated numbers, Collins goes back to the piano for a lush ballad. That is a nice respite by this point in the album.

"The West Side" is a mid-tempo jazz instrumental piece.

The final track "Why Can't It Wait 'Til Morning" was released as a single only in the UK, where it only got as high as number 89. A string arrangement is the sole accompaniment to Collins at the piano.
Posted by Martin Maenza at 4:30 AM